Now, I’m no armored cavalry nut, but I am curious about the forms of tank mobility we’d expect for the late Industrial Stage:

And combinations of the above (see the Halo series’ “Choppers”).

Anyone know what would make the player choose one in the Tech Editor over the rest?

Obligatory disclaimer that I may just be talking out of my ass here, I’m not an expert.

Treads are good because they can handle a lot of weight without damaging the terrain their on as much as wheels or legs, I would also assume they provide more stability than wheels. They also provide better terrain handling than wheels, though not as good as legs.

Very fast, but require a flat surface to function. Only really for use in places where you can expect roads, so for a species that doesn’t have a lot of infrastructure they may prefer treads or legs.

Potentially very fast, absurdly good terrain handling, and may be able to support a great deal of weight. Might also be very slow, have very poor terrain handling (If it relies on ground effect it may not be able to cross trenches for instance.) and be unable to support much weight. IRL hovercraft have very poor handling, as they have to rely on drag and are moving relatively slowly.

Extremely good terrain handling, only beaten by the spider configuration and potentially repulsors. Also relatively unstable, moderately slow compared to wheels on flat terrain. (On the other hand, legs can get you to a lot of places wheels can’t. There’s a reason there’s no such thing as a wheeled animal and it’s not just the mechanical challenges.) The amount of weight they can support ultimately depends on what they’re standing on, but less than treads as a general rule.

Same as bipeds, except more stable.

I would like to remind people that I’m not an expert and may in fact be completely wrong about all of this.

Realistically, bipedal tanks are too unstable, expensive and too big of a target to be rendered feasible (compared to others). They’re also immobilised a lot easier than, say, treads.

Spiders would suffer similar issues to bipedal, but they’d at least be more stable and possibly smaller. Also, they’re not as easily immobilised. Also more of a feasible substitute.

I believe the reason we use treads is because they’re great for all-terrain movement and can support the tank’s weight better. Also, they don’t sink as easily as isolated wheels.

Speaking of wheels, they’re a feasible substitute to treads, albeit a bit less suited for certain terrains (e.g mud stuff)

Repulsors, if you could figure out the tech, may be a feasible substitute, due to not really being able to sink, as well as not being much of a main target. Would be more expensive, but probably worth it.

Combinations depends on the combination. Treads and wheels would just be odd, since treads have wheels. 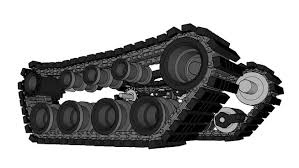 A walker with wheels would probably be a good idea, in case the legs are blown off or whatever. Sort of a backup form of movement.
A tank that could turn into a spider walker at will could be a good idea.
I don’t think repulsors really need a backup, but if they do, treads or spider legs.

I think in-game a lot of people would probably resort to either wheels or tracks, since the walkers would be rather expensive in comparison. Though, you may get people who make bipedal walkers for the sheer joy of having bipedal walkers.

Spider-walkers is a mystery. Repulsors would probably be an upgrade rather than an actual design choice, as treads and wheels are outdated.

Bipedal walkers are silly, but at least they look cool.

I was thinking bipedal tanks might actually be very small, more human sized. Doesn’t really qualify as a tank at that point, but could still have tons of uses in urban combat if it’s light enough to move around in buildings without difficulty. And potentially even if not.

And combinations of the above (see the Halo series’ “Choppers”).

Depends on if you have a good way of stopping, if you don’t have some way of generating counter-thrust, such as if the only thing the repulsor does is lift you off the ground, then you don’t get a whole lot of control over your vehicle, and recoil is going to be pushing you around a lot more than you might otherwise expect.

bipedal tanks are too unstable

Depends on how advanced your tank is, a sufficiently advanced tank could easily be just as stable as a human.

Problem is that bipedal vehicles would probably tip over if trying to go uphill or downhill, so they’d only be effective on relatively flat surfaces.

I mean, you could probably have two pole things that extend to stop a repulsor-based vehicle. If you can’t just have them change direction.

I was thinking bipedal tanks might actually be very small, more human sized.

That’s what we call mech suits.

Problem is that bipedal vehicles would probably tip over if trying to go uphill or downhill, so they’d only be effective on relatively flat surfaces.

Maybe, or maybe you develop some practical way of shifting their weight around so they can balance themselves the same way humans do.

That’s what we call mech suits.

I think the best way to have a bipedal vehicle is to make it a combination of bipedal and spider (if you want it to be a pure walker). The spider bit allows it to go uphill better, plunge the legs into the ground and all.

Though that eliminates the purpose of having it bipedal in the first place.

I’m not sure why you think a biped would have so much trouble going up a hill? I’m assuming it would have knees and articulated joints. (Potentially more knees than humans do too.) Still, you’re right in that multi ton walkers probably aren’t going to be practical, and bipedal armored vehicles will be almost entirely the province of mechsuits and the like.

Depends on steepness. At a certain point, the walker would just not be able to climb. Relatively flat, or slightly sloped, it’d be fine.

Humans sometimes use arms to shift weight when walking, so we could possibly attach a arm-like system to help it balance

What about quadrupedal leg configurations?
They would be twice as stable as bipedal walkers, and if advanced enough, could cross almost all types of terrain.

It depends on the planet your on.

I guess bipedal’s stability is based on how big it is, how feet are made, and how heavy the legs are. Spider’s stability may be based on how the leg is built, for example if you make spider legs that LITERALLY pierce the ground when walking, it will be extremely stable.

What about a centipede style tank, the body is split into sections and each section would have 2 or 3 legs on each side, if you can choose where armor goes the legs could be covered in large think plates, if the tank takes fire the legs act like a shell, the sections could all have different purposes, sections with ammo, sections with a turret (maybe combined with ammo), and 1 or 2 power sections to power the thing. With the outer shell and the turrets on top it could be a mobile wall (long hard to kill and has defenses).

U sound like Hitler with the Ratte. Bombers will have practice bommbing ur sentaped.

It sounds pretty badass, but wouldn’t it be way too costly compared with it’s survivability? As in, a couple bombs could easily take it out (destroy the power compartments and it’s completely immobile, or drop a bomb in the ammo compartment to create a big-ass explosion (relevant xkcd)), and then all the money used to built the tank will be wasted (also, if the enemy manages to immobilize the thing, they could repair it rather easily (since they’ll probably have the machiney required nearby) and then the enemy will have a new tank)

Yeah a bunker is way better at that job
edit: also they whoud use the sentepeed as scrap metal

What’s been said about bombs probably goes for any tank. You need to consider how people are going to get explosives into the power or ammunition supply (assuming the ammo is even explosive; railguns only need a hunk of metal with no propellant) in the first place.

We’re not idiots, we know that a military’s not going to send such expensive things as tanks, legged or not, into battle without being certain literally burning cash isn’t the more financially sensible option. The commanders aren’t going to send them hurtling toward certain doom below the enemy bombers, because they’ll either commence the assault before the bombers even have time to mobilize, or they’ll cover the tanks with fighter-type aircraft (we can assume the enemy is smart enough to provide escorts to their bombers by the same principles).

Either that, or, since these commanders have the audacity to commission and field legged tanks, they, understanding that the enemy will take anti-vehicle measures (bombing runs, propelled explosives, stationary mines, etc.), employ similarly advanced technology to increase the vehicles’ survival rate - shields, point-defense, maybe even cloaking or jamming devices so they can’t be targeted in the first place.

I’m more worried about what a centipede tank could do that other forms of tank can’t do more effectively (both in terms of function and cost). The way weight is distributed, it isn’t going to be particularly fast. If it’s divided into sections, it might be more flexible than a spider tank, but it’s not going to turn faster. This thing sounds like it’s designed to scale sheer cliffs, a task that aircraft easily bypass. The only drawback I can see to sending aircraft is that they’re hard to hide, so, if our intrepid belligerents are currently losing the stealth vs. sensors arms race, they must be fielding terrain-scaling centipede tanks for low-profile stealth missions.

We can (and, to prevent being too heavy to climb, must) ditch most of the armor for the sake of mobility, leaving us with a spec ops recon vehicle, rather than a main battle tank.