In this thread I will be showing different microbes as I create them in-game, in the new version 0.5.6. Anyone is welcome to reply including their own species, either improved versions of my own, or completely new microbial designs

The first one: Legolus Rhovaniom. It thrives on the surface patches, where sunlight is abundant, and biodiversity is highest. It is equipped with a cellulose membrane that grants it relatively good protection and a lower osmoregulation cost. 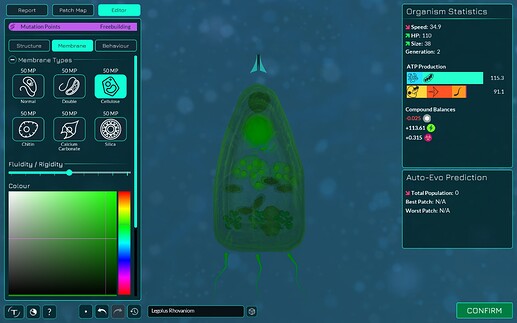 It is an autotrophic eukaryote, but counts with a Toxin Vacuole as a means of self-defense. With it, it shoots potential predators from a distance, with precision. Its agressiveness and bravery attributes give it a plus in defense capability. 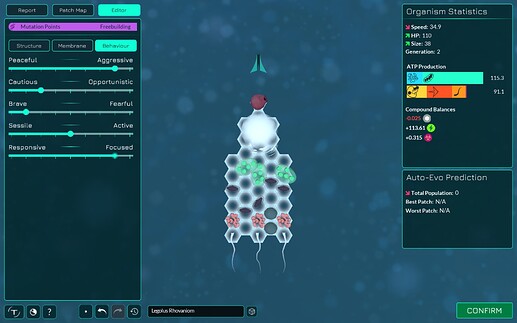 With three flagella, it is relatively agile and maneuverable despite of its considerable size. Its energy needs are covered by several chloroplasts, mitochondria and metabolosomes. 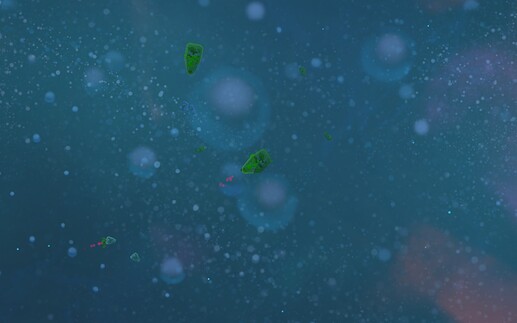 This is the species of my playthrougt: 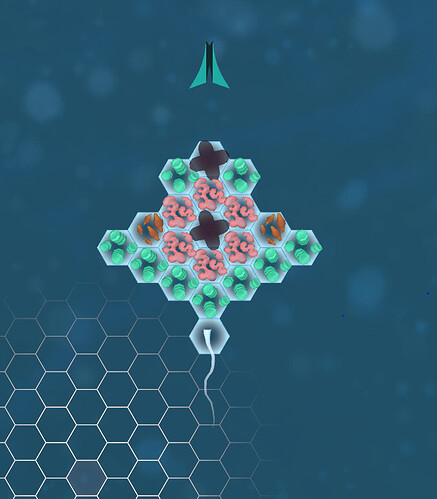 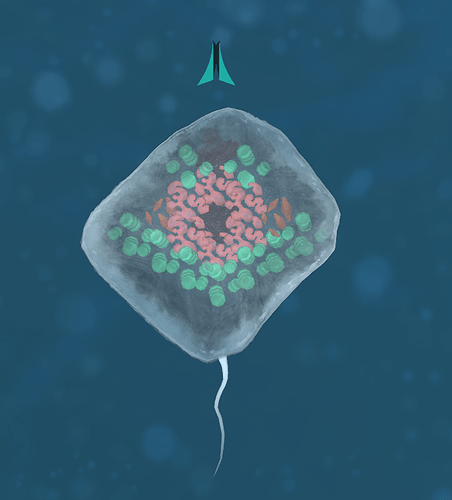 I would used something similar in a 0.5.4 gameplay until 0.5.5 came out and actually decreased glucose

I have not been able to remain stable since that

Just a tip, the negative glucose reading takes into account the cost of movement, so you might actually still produce more glucose if you just don’t move for a little bit.

Even then, photosynthesis reduces your rate of consumption so you have to eat far less often.

Gimlius Helm is a small and strong species of bacteria adapted to the Cave patch, a harsh environment where neither sunlight nor marine snow -which make life easier in other habitats- reach. To survive there after the glucose disappearance event, these little bacteria rely on the iron emanating from floating rocks, never getting very far from them. As a secondary energy source, they have a bunch of proteins that turn hydrogen sulfide into glucose. 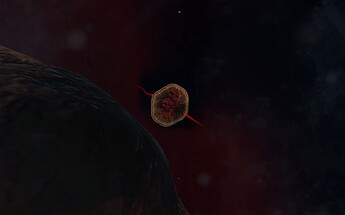 With its pilus, they are capable of hunting slower and less adapted bacteria that commit the recklessness of approaching their rocks. Their strong and rigid silica membrane offers a great protection against occasional toxin- or other pilus-wielding organisms. 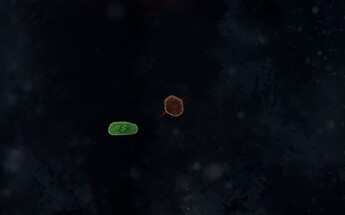 With 6 Rusticyanin organelles, it produces just enough ATP to cover its osmoregulation energy demand. In other words: it can survive in the environment by just collecting iron, hydrogen sulfide being just a back-up energy source. Thanks to its responsive behaviour, they are not likely go after prey for long times, which would put them at risk of running out of iron. 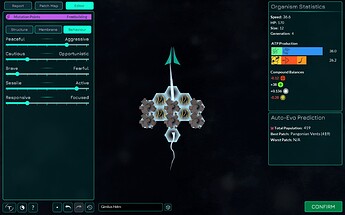 This is the species of my playthrougt:

Awesome! I have actually never tried to use more than a single Oxytoxisome. I guess that the production rate of Oxytoxy will skyrocket.

Premia unceccys is a scavenger that lives in the pangonian bathypelagic, where plenty of marine snow can be found.
It substists mainly on marine snow, using the iron from the occasional rock that it finds while wandering around as a secondary energy source. 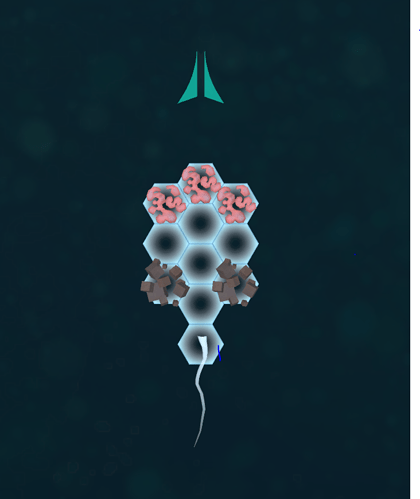 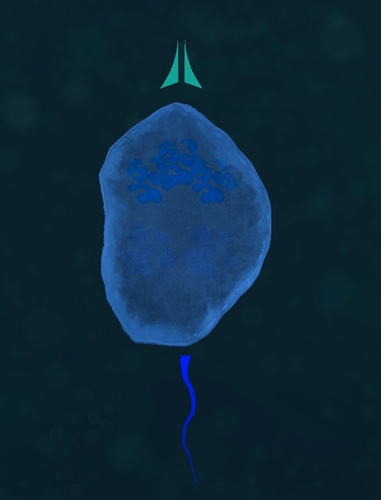 Its flagellum allows it to quickly escape from predators and cells bigger than it, and also occasionally engulfing other cells. 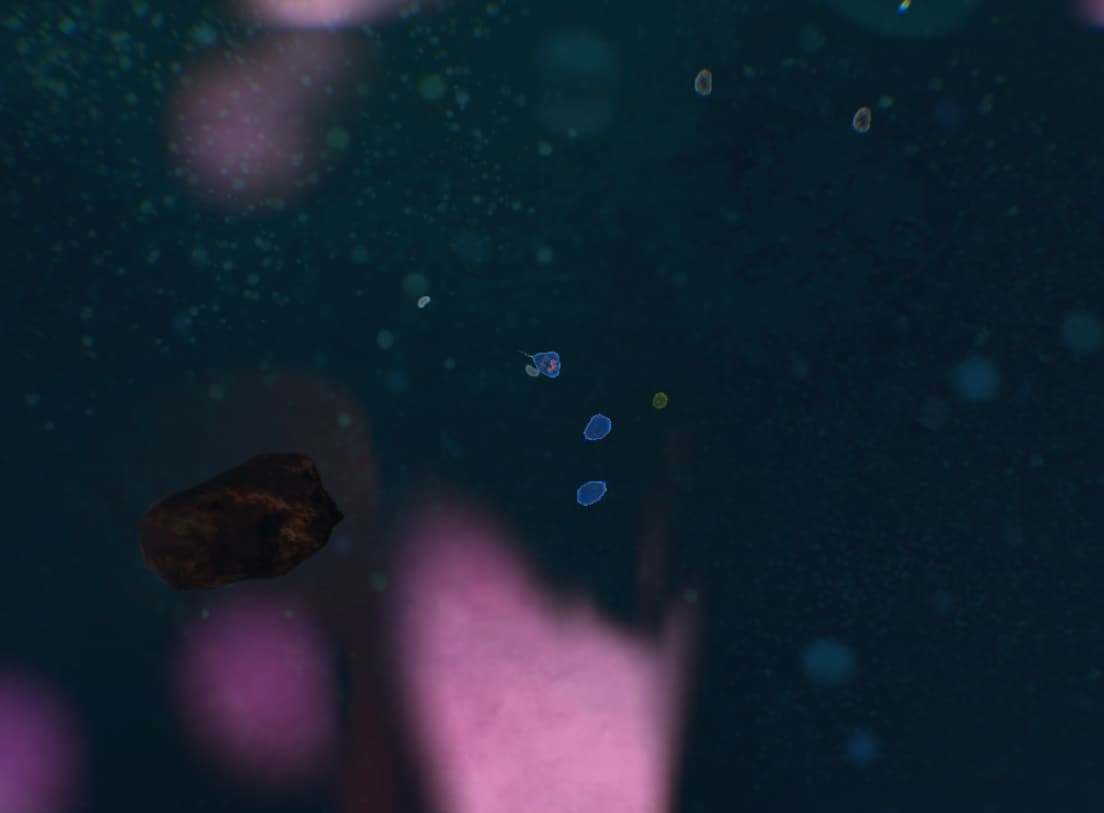 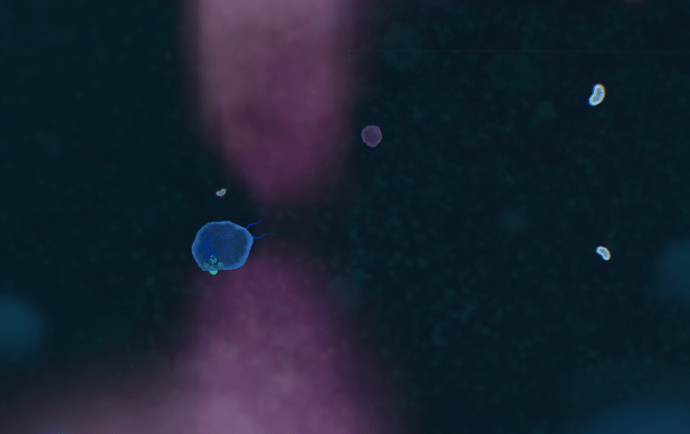 Treebeardus Fangorn is a species of big eukaryotes that inhabit the Estuary biome. After the glucose disappearance event, they evolved to became photoautotrophs, relying on light for ATP production. As light constitutes - at least for the moment- a uniform, constant and infinite energy source, they can easily cover all of their energetic needs out of it. Furthermore, they are capable of producing ammonia -to support their own growth- from the dissolved nitrogen in the surrounding environment. Due to their considerable size, their biome can only support a limited number of them. 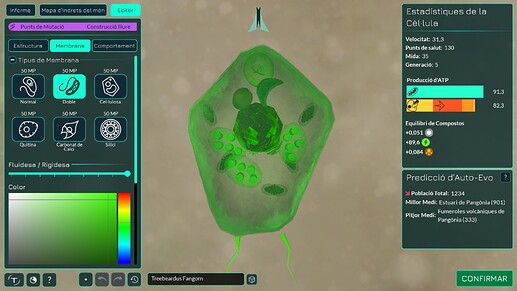 In order to reproduce, the Treebeardus Fangorn need to slowly navigate -equipped with two flagella- the environment to find and collect scattered clouds of phosphate. During those long voyages across the Estuary, they sometimes meet with potential predators, eager to take over their glucose and ammonia. The rigid double membrane provides them with a relatively good protection, while still keeping the ability to engulf. Indeed, even though the Treebeardus Fangorns are not especially aggressive by nature, they are prepared to engulf and end with any predator that insists too much on hurting them. 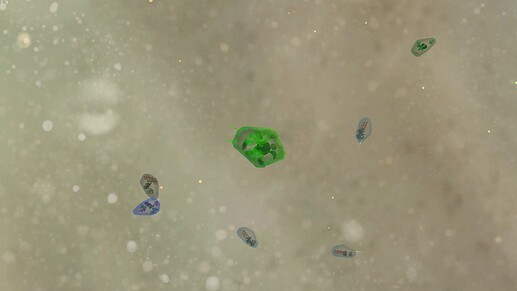 However, in some occasions, if attacked by a numerous swarm of fast, agressive, toxin-shooting bacteria, a solitary Treebeardus Fangorn individual can get overwhelmed and perish. That is why, as a sort of evolutionary countermeasure, they evolved, for the first time on the planet, the capability to segregate a special agent that allows them to form colonies. Once a colony of a few Treebeardus Fangorns is formed, they are practically unstoppable, a true force of nature that thrives leaving all competition behind. 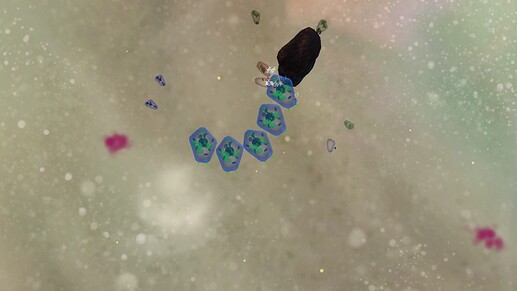 However, without any doubt, it is only a matter of time that other species develop into colonies and even multicellular organisms. The evolutionary arms race on the planet has just started, and Treebeardus Fangorn is just a small and temporary link of it.

Just yesterday, i made something basically the exact same as yours, mine was just bigger. i ended up getting a colony of ~ 10-20 cells consistently.

Heres something that could be cool…
What if the player cell doesn’t evolve at all, and what if we all just didn’t evolve for one playthrough to let the A.I go wild?

Well that is the speedrunning strat currently, as you can reproduce much faster and with fewer resources when you are just a single hex.

I have a species to add to the bestiary! This is a species I created to test my auto-evo. 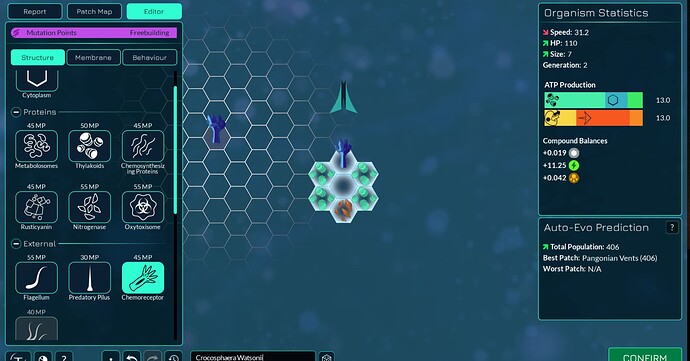 This cyanobacterium can easily live in any of the 100% sunlight patches of Pangonia. It never runs out of glucose, and usually has half of its ammonia filled by the time phosphate has been collected. The chemoreceptor detects phosphate out at maximum range.
While it does not have any weapons, it has a (fully fluid) calcium carbonate membrane which gives it health and toxin resistance. I have little issues with predators while running this build.

I would not reccomend this to speedrunners, but I’d say it’s a good one for beginners. My auto-evo algorithm agrees, and even thinks it can outcompete 1-hex thylakoids!
Btw, aside from the choice of membrane, this is actually inspired by an irl species, Crocosphaera Watsonii actually exists! 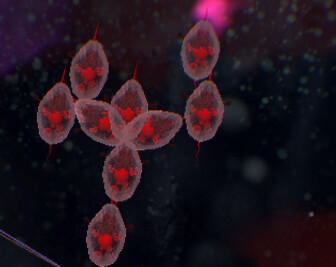 This rust monster uses its scoop-like upper half in order to push large chunks of iron with it, which give it food while it pushes them. 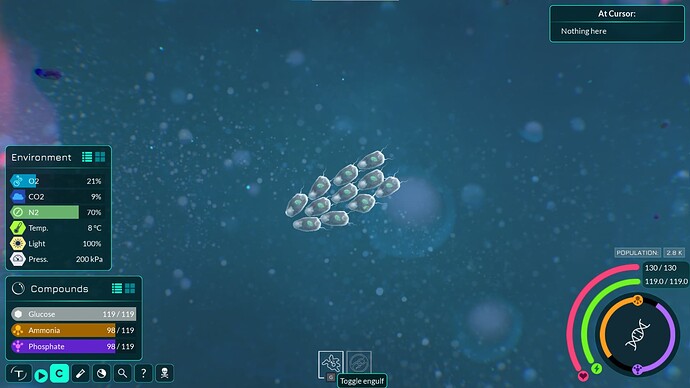 A multi-cellular creature i made a while ago, using photosynthesis to let the species remain sessile, allowing complex body structure to be developed where i carefully arrange cells into the correct position. The double membrane and max rigidity combined with many flagella for it’s size, allows it to move quickly through the water whilst remaining durable and being able to engulf prey. I found the species to be extremely overpowered because it can chase down organisms and quickly engulf them without stopping as the absorbed cell passes through it. Its symmetrical cell layout with the controller cell in the middle allows it to maneuver quite agilely for it’s size, and if it gets damaged on one of it’s cells it can bank to the side, protecting the damaged cell and putting more undamaged cells in the way of the attacker.

As a result of all of these details, it can survive in environments made up almost entirely of toxin shooting cells, whilst being able to hunt down smaller cells which it can quickly engulf in it’s body on contact. It can also use advanced tactics that leverage it’s large size and long snout, such as to quickly strike nimble cells from the side before they can react, or to surround smaller cells in the frontal mouth gap. It hunts in order to collect nutrients in the form of ammonia and phosphate, which it harvests from prey cells. like a real life multicellular organisms of that size, it is able to endure small wounds without losing cells during engagements and easily heal them with it’s excess glucose.

i ran a version of this build that was specialized for extracting glucose only from prey cells rather than the sunlight, and it performed even more effectively than this creature did, able to survive on smaller, faster cells that reproduced faster and could easily harvest enough glucose from the environment due to it’s colony nature. However, the one drawback was that it’s active, non-sessile lifestyle prevented complex body structures form being arranged, meaning that i could never form the ideal shape for shrugging off wounds during a hunt, so the creature would often be ripped apart as cells died.

With this in mind, i recommend that some sort of ‘clumping’ behavior bar be added for the early multicellular stage before the multicellular editor is unlocked, so that transitory species can bunch up and attach together more effectively and allow these sorts of lifestyles to emerge. Additionally, some sort of ‘adhesion likelihood’ bar so that species that posses adhesive hexes will connect together when they rub agaisnt one another. This way the auto evo will take into account these sorts of colony lifestyles and let players create species that combine on their own, or allow AI species to make the jump into colony and then multicellular life.

Nice! With 0.5.8 coming around the corner, you will be able to make that species without just binding agents, and instead, true multicellularity.