Thrive version 0.5.8 is finally here; And with it comes the versatile signaling agents, which allow you to actively communicate with your allied cells; New randomly generated region names, which gives each world a new and unique flair; The highly anticipated multicellular prototype, which permits you to progress further than ever in the grand journey…

Does the Steam version also get updated today, or just the github launcher?

Yes, it’s already updated. Try checking for updates and/or switching off the beta setting if you haven’t already.

The Devblog hasn’t yet been published to Steam though.

Seeing this project go from barely a dream to having the first step approaching completion over the course of the years I’ve kept an eye on it is nothing short of inspiring. There was a time, some five or six years back, when I remember looking around the forums and seeing the general consensus being “We’ll probably never complete this, but why not try anyway?” Now, I can’t recall the last time I saw someone pondering future builds reffering to the idea that they will likely never see a time when the discussion might be relevant. I may not be a dev, but I still find myself proud of this community and how far it has come.

I’ve found that if I want to quickly test that the new build works on Steam verifying the game files will make the Steam client realise faster that there’s a new version.

Also the update is now also published on Steam: 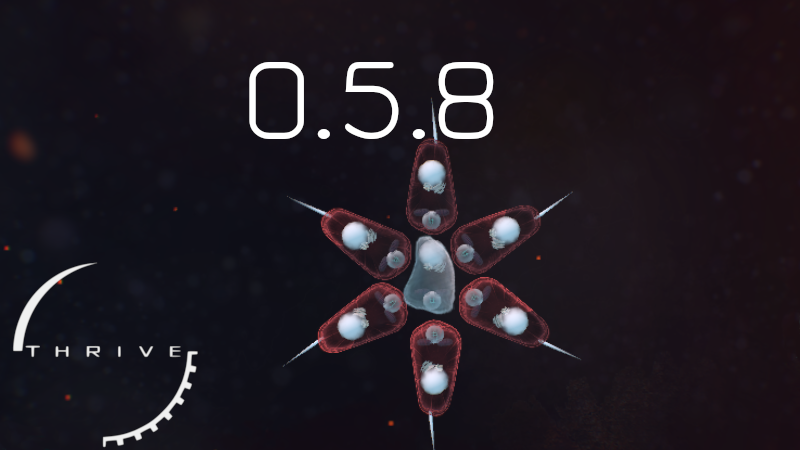 Thrive version 0.5.8 is finally here; And with it comes the versatile signaling agents, which allow you to actively communicate with your allied cells; New randomly generated region names, which gives each world a new and unique flair; The highly...

yknow what system? you’re all right…
sike! i know your plans to destroy the forums! you won’t fool me as easily as the others…

Hello! Immediately I apologize for my English, I’m just learning it. I have one question about version 0.5.8, has a bug been fixed, due to which it was impossible to remove any organelle (even cytoplasm) from the cell during the multicellular stage? It’s just that I haven’t had time to play on the release version yet, only on rc, and this topic excites me very much

Editing the cell types should work, including removing organelles. If you are talking about removing or moving cells, that has not been added. Though some people report that using the delete key you can actually remove placed cells, but that isn’t an intended feature and might lead to extra bugs.