I’ve been lurking on this forum for a long time and I am surprised to see barely any discussion about dinosaurs. Feel free to talk about anything dinosaur related here.

Since no one has responded I’ll start:

Explore how scientists discovered the largest predator ever lived and hunted almost entirely in the water.

Recently scientists have reconstructed a spinosaurus fossil and it was more aquatic than they thought it would be.

I think I’ve watched a bit of it on YouTube it was good. My favorite episode was the one with the spinosaurus. It’s outdated but still good.

What is your favorite dinosaur out of these three choices?

Dinosaurs were probably the most important thing to happen to me, as odd as that sounds. After playing Jurassic Park: Operation Genesis on the Playstation 2 when I was around 6 or 7, I was absolutely enchanted by these amazing creatures. I bought John Malam’s and Steve Parker’s Encyclopedia of Dinosaurs and Other Prehistoric Creatures, read it through a couple hundred times (I still skim through every once in a while today), and from then on, I was in love with everything about these ancient creatures. I would visit libraries and check out every book that had anything to do with dinosaurs, and I would drag my parents to whatever museum had fossils. To this day, if you gave me a picture of a reconstructed illustration or a skull from a random dinosaur, times I bet I could identify the creature to which such likeness belongs to 9/10 times.
From dinosaurs came my interest in all life, and ultimately, my interest in science would extend to zoology. I salvaged whatever book or show or game, whatever information that had to do with animals, and I once again became obsessed. Of course, I soon realized that dinosaurs were also animals, which had to mean that there were endless amounts of animals in our Earth’s history, endless and grand forms of life; and that these animals had to come from somewhere. Hence, my interest in evolution. From my interest in animals came an interest in ecology, in the Earth which shelters all these things that I am in love with, and thus I learned everything I could about our biological cycles, the different forms of clouds, the weather, basic geology, plants. And from my interest in evolution, in evolution and geology and life, came an interest in cells. And from my interest in the Earth below us came an interest in the heavenly celestial bodies above us, an interest in astronomy, and from that basic physics, and from that and cells basic chemistry. And from this interest in that which preceded us came an interest in us; how society formed, how humans developed culture, how history looked, and from that came an interest in politics and a desire to help people, and hence, my current pursuit of political science.
And once again, all of this because of a kid who fell in love with long-extinct animals and a kid who loved reading about the things he loves.

Thanks for replying to my thread! Dinosaurs are probably one of the most important aspects of my life as well, heck if not for my interest in them I wouldn’t be here.

I am also a big Dino fan! I remember when I saw Jurassic Park for first time on my terrace (yes, on my terrace). It was a calm night - the only sounds were coming from the old TV and the grasshopers (and there was a mantis that sat near me, which was quite terrifying not going to lie, but I just let it do it’s own mantis things and no conflict occured). When the scene with the tyrannosaurus came, my 7-8 years old me went nuts! It was awesome, especially the roar. And don’t make me start with the end of the movie - the scene with “When the dinosaurs ruled the Earth” was something beyond awesome. Since then I was interested in paleontology and I was digging in my yard with those little plastic shovels. Thankfully my dogs were kind enough to leave the bones of their meat in the yard - for me all those bones were dinosaurs’ ones! Truly happy years. I even remember when I thought that there was a dinosaur in my school’s yard (and I thought that it was Utahrapot) and I may have dragged the whole class “investigating” with me:D

You can imagine my sadness when I found out Jurassic Park isn’t possible:(

Anyway, the dinosaurs didn’t wake up only my interest in paleontology, but in pretty much everything. I was really into nature. You probably know of those insects in amber who were sold for cheap - I had a very big collection of those (scorpions, spiders - everything!). I also had one of those books with 3d model of the human body. And I haven’t even mentioned the thousand encyclopedias (my favourite being “Bang!” by Brian May and Patrick Moore).

I can relate, dinosaurs is what made me interested in Spore, which then of course led me here.

I’ve had dinosaur toys as a kid but I’ve never knew what this species is: 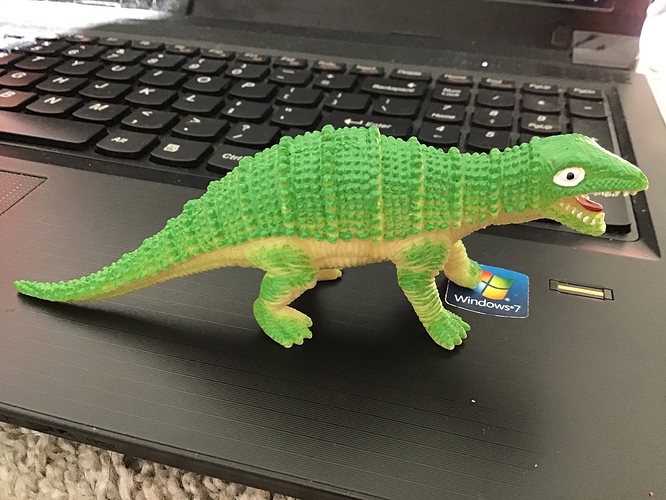 Can anyone tell me what the heck the dinosaur in the image above is?

i dont think such species exists, it looks like a hybrid between an ankylosaurus and some kind of theropod

I agree, although it could be a species I’ve never heard of before

Nah,it looks like a theropod, but it’s quadrupedal, and it has 4 digits on its legs and hands 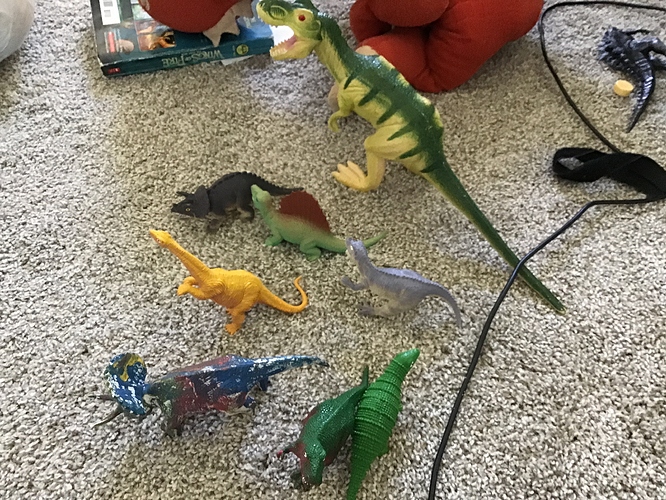 Well i once had a full bag of dinosaurs, there were a lot of them. I ended up throwing the worst of them and the rest i gave away. I think i lost my toy rat in there :c (It was my favorite thing)

My toy dinosaurs were my favorite toys

Other than my angry bird plushies of course

before i didnt really like dinosaurs lol, but now they seems very interesting, especially birds, they’re my favourite

now can someone tell me a random dino fact?

Okay here is your dinosaur fact: