some of you may remember me trying to make another fantasy game a while back, and this is somewhat similer.
except this time, everyone has to play as humans and there aren’t any roll bonuses for simplicity sake (maybe sometime later i’ll reboot it with the other stuff)
there is magic but it has to be discovered through some great feat.
the game uses a 20 sided die and everyone starts with 1000 citizens and with simple stone tools, the ability to make fire, a tribal leadership and the ability to make simple tents from sticks and animal hide/bundled grass.
every few dozen rounds when everyone is stable there will be a “cataclysm” that affects the entire discovered world and has ramifications for centuries to come, whether this is a demonic invasion or a devastating plague we will have to wait and see.
like soundwave’s game there are ancient locations that were left behind from some hyper advanced civilization, these tombs, ruins and dungeons are chock full of valuable loot and powerful items.
i’ll start the game when i have somewhere in between 6 to 8 players.
also this is a map of the starting location (there is a lot more to discover but this is where you guys can start), for reference the small landmass in the north western part of the map is the size of the uk. 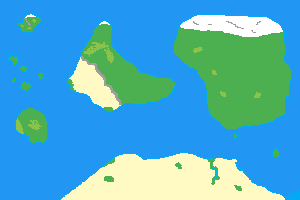 My civ name will be Arpan

you also need to choose where to start

I will join to:
name: Xe’zrag
I will start in the most North-west Island on the east plain aside the forest
Do i did it right?

yeah.
though if anyone wants they can be less specific.

I will start on the eastern continent

The big green one

Can I start on the eastern continent just south of the tundra?

My civ will be the Noj tribal confederation.

btw to anyone currently planning on playing the game.
since i don’t have enough players and it seems that not to many people are interested i am rehashing the game, i should have the rehash up in a day or two.

I don’t know if this thread is dead, but ill join

Civ name will be Abacus

on the large island in the mid far left

oh btw, i handed the game off to TwilightWings21, gave him all of my ideas, and then he turned it into his own thing.

I was unaware of this

the dinosaur game? the one with all the birds?