Being as bored as I normally am (despite having things to do), I had the idea to come up with a forum game, and so I did.

How this game works is one person makes a creature, plant, or microbe that lives on an earth-like planet. The next person makes a previous entity’s prey or predator.

Creatures must be made in this format:
Relationship to past creature:
Name:
Kingdom:
Description:
Interesting facts:

Here, I’ll start.
No previous creature exists.
Name: floater
Kingdom: animal
Description: a small planktonic invertebrate that spends its life floating around warm seas. It’s body is shaped like a mantra ray and it has a blind gut. Floaters most closely resemble earthly flatworms, and form blooms like krill. They sense their environment using eyespots and primitive smell, and tend to be green or transparent.
Interesting facts: the larva of floaters lack guts and mouths but have the ability to photosynthesize using a microbial symbiont that is lost by adulthood.

Now someone else can make their prey or predator!

I think I will continue:

Relationship to past creature: none
Name: Unity
Kingdom: animal
Discription: A group of zooplankton that have joined together to be large enough to protect themselves and also to eat small prey from them. They are in the shape of a ball with a hole that is able to open and close, thus trapping the prey inside it and digesting it there.
Interesting facts: They reproduce through germination

Relationship to past creature: Eated by floaters
Name: Larta
Kingdom: plantae
Discription: A 2 to 4 mm big photosynthetic plankton that stays near the sea surface. Is of a blueish color and it doesn’t have a defined shape.
Interesting facts: It can reproduce both sexually and asexually

Relationship to past creatures:Eaten by floaters
Name:Epipedokyklo
Kingdom:Animalia
Description:A species related to floaters which,due to neoteny,are unable to progress to full adulthood.They rely mostly on their photosynthesis for nutrients.They are also completely immobile
Interesting facts:They still retain an inefficent gut despite the lack of use for it

did you guys read the rules?
the creature you make needs to be related to a past creature

I like how you put “Relationship to past creatures: None” and in the description “A species related to floaters”

The rules do state that but if you really wish they can be related (and by that I mean eaten or eating by) a different past creature. It still must prey on or be eaten by one of the past creatures. No need to adjust the one’s already made though, so that we have a diverse planktonic base of an aquatic ecosystem.

I thought the relationship thing is just prey or predator

(It is just prey or predator.)

Relationship to past creature(s): eats Epipedokyklo and Larta.
Name: selkish (no plural form)
Kingdom: animalia
Discription: common filter-feeding pelagic nekton. They are 5-20 cm long (2-8 in), and lack mouths. They have a gut but it doesn’t really have any openings. Instead the gills of selkish have a mucus layer that redugularly goes through the gill slits into the gut for ‘cleaning’, removing capured plankton. They are simply not constructed to eat anything that large and so leave unitys and even fully grown floaters alone. They swim through osmosis jets at a steady pace, maneuvering with fins that can also be beaten to generate extra thrust. They often form schools, and follow one another with their complex eyes that can see their distinctive patterns (disrupting patterning) and follow movement. They are quite simpleminded and lack self-awareness.
Interesting facts: they are sequential hermaphrodites, switching sexes to ensure a balanced population.

Interesting facts: it can generate new individuals throught its roots, when doing sexual reproduction it expels spores in the water.

Relationship to past creature indicates weather it preys on or is preyed upon by a past creature, though for an autotroph with no real possible predators I don’t think you have much option. Perhaps unitys could eat them?

Relationship to past creatures:prey on Jiota
Name: chorlc
Kingdom: animalia (i think)
Discription: A group of zooplankton peelers Who are the descendants of Unity, in size of 2 - 15 cm that have developed arms that allow it to move on the bottom of the sea and shred its food straight into their common mouth. In the single-opening gastrointestinal tract there is a special pocket that allows the prey to be mechanically broken down into pieces and Enzymes that are able to efficiently break down into nutrients that spread in a blood-like fluid.

Interesting facts: In their tentacles/arms there are sensors that are able to sense gas transitions, allowing it to find prey more efficiently even if it is buried.

Relationship to past creature:eaten by chorlc, eats unity and jiota.
Name: niveish
Kingdom animalia
Discription: these 2 inch (say 5 cms or so) long ambush predators hunt at night, eating largish prey. They are propelled with a tail fluke and turn with two fins near their tail. They have eyes but are nearly blind, using them only to signal when it is daytime, and therefore when to sleep. The niveish’s main sense is smell, though they also have quite good hearing. They have two sensory tentacles and one shovel tentacle to shove food into their mouth. They have a through gut and are quite intelligent (and by that I mean they can remember things for a full week and understand the idea of cause and effect, real Einsteins). The niveish kill prey with sharp spines on their tentacles, and chew with dentin plates in their mouth. They reproduce by laying huge jelly-like egg sheets that the males sniff out and fertilize.
Interesting facts: they have a simple skeleton with a dentin spine on their ventral side (as opposed to earthy cordates) and gill arch like structures of cartilage.

What is a dentin spine?

dentin - the material made the teeth
spine - spine

so is just a spine made of a different material than the ones on earth? and what about the gill arch structures? 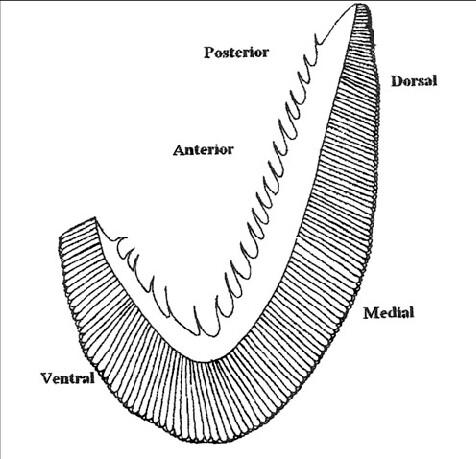 this its arch gill, almost all gram fish have it

Relationship to past creature: Eated by niveish and chorlc
Name: Koita
Kingdom: Animalia
Discription: A species that descends from Epipedokyklo that lives anchored to the ocean floor, it has long appendaces that it uses to photosynthesize and to absorb nutrients from the currents the appendaces also have light spots that are able to detect the light level and hairs that are sensitive to vibrations, it also has a shell.
Interesting facts: is able to move its appendaces into his shell and is also able to fully regenerate them. When is night it retreats his appendaces into his shell.

Relationship to past creature: eating selkish, chorlc, niveish and Koita
Name: Fiziz
Kingdom: Animalia, Unitoids
Discription: A group of peelings originating from unity with a width of 30 -80 CM that specialized in ambush hunting using special confinement cells within which unitys, Larta and Jiota reproduce. When he wants to hunt, he releases some of them and waits for something to approach and tries to eat them. And when he gets close enough, he exposes himself and wraps the prey in the middle of his common mouth and strangles him. Once this is complete, he ingests it and grabs back some of the lures he has released back into his prison cells and feeds some of his prey to them. It looks like a transparent rug that sometimes buries itself and like the chorlc, there is a pocket that can do mechanical and chemical decomposition when it preys.

Interesting facts: Despite their size, they are actually very thin, but are coordinated by a special distribution system of peelers that behave like a nervous system, so that although is not a nervous system, it is still able to behave like something having one (this is called “Emergence”).

Relationship to past creature(s): eats unity, small selkish and sometimes niveish.
Name: pelagidon
Discription: a small (8 inch/20 cm long) predator, pelagidon hunt a variety of prey. They are soft-bodied hunters with a shell on their head. They attack prey with sharp protrusions of their shell that become unfused and motile with maturity. Once they prey is killed they open their shells to feed. They have a through gut and propel themselves with four padle-like fins that protrude from the back of their shell. They have a swim bladder and hunt with electroreception and smell. They have eyes but they are normally covered in their argonite shell.
Interesting facts: pelagidon young lack the ability to hunt prey properly or maneuver against the current and so behave much like unity.