I’m a big fan of Warhammer 40k, and one of the species in this series are Orkz, which are humanoid and sentient colonies of fungi. I think it would add interesting flavor if we could see mobile and sentient fungoids or plantoids. What is your opinion on this?

I imagine creatures like that using it mostly for endurance for when not much food is around, so they have a little bit more time to find food?

There are carnivorous plants here on earth so I think it would be theoretically possible for mobile fungi species but they would lack any serious cognitive powers unless the species functioned like the “Flood” from halo and had one large immobile “Brain” or “Queen” that would somehow convey information to and from the other members of the species.

From what I understand, photosynthesis isn’t very efficient. It converts very little light into glucose. That’s because plants on earth get enough energy from sunlight and haven’t really bothered to evolve it any further.

It wouldn’t be entirely madness to suggest that perhaps some kind of alien plant would have evolved a more efficient form of photosynthesis to sustain itself and even powerits potentially high level cognitive processes.

As for fungoids, they could probably work roughly the same as normal animals. Getting nutrients by just old-school consuming other things.

Here is the fungoid Ork by the way. They have been bioengineered somewhat by the most advanced species in the 40k universe. 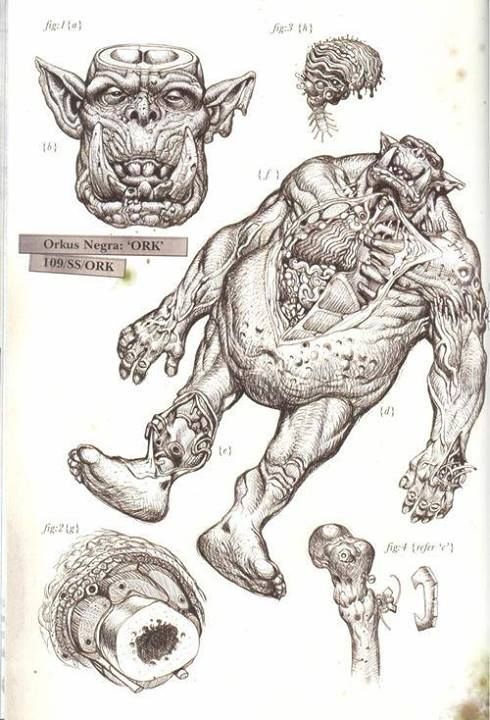 This may be somewhat unrelated, but I have always woundered how creatures like slime molds would fit into a game like this? However they might be able to provide an general idea of how some cells that are technically fungus or plant cells could form togeather into a complex organism that can move.

Fungi are heterotrophs (they eat other organisms), so energy consumption is not an object. Perhaps these organisms would just have lots of binding agents and reproduce by budding.

Fungi are know to form colonial systems similar to nervous ramifications when in large amount of land.
They cannot move, but the entire colony can react to the harm of one subsection and adapt to it so there’s that.
Also, some fungi develop symbiotic relations with other species (lichen for example), so maybe they could live on the back of some mobile animal and provide protection against some kind of parasyte or infection (if that exists in the game).

With the fungoid I think you guys are on the ball but my idea with the plants is that once the resources required for the plant thins (i.e. soil becomes infertile), the plant could be able to expel a significant amount of energy to move a distance away to someplace more abundant.

This would not make sense though seeing as it would be just plane better to produce seeds that could travel long distances and find fertile soil. If plantlife were to become mobile this would not be the reason for it.

I’m going to go and talk a bit about this example because it needs a bit of explaining. Just what was given here doesn’t really tell the full story.

Orks, by the nature, were created for warfare. Created. They are an artificially created lifeform, made by what are called The Old Ones, either through direct manipulation or some other method. The lore does not give a definitive answer.
Thus, given their purpose, their reproductive processes were made so that wherever the Orks went, they’d be almost impossible to exterminate. They’d be almost impossible to recreate naturally through Thrive’s proposed gameplay regarding plants.

Here are a few bullet points to consider about the Orks reproductive cycle:

1. Orks produce spores. They spread them throughout their lives through shed skin and even more upon their death.
2. These spores require shade to grow, precipitation not apparently a factor in it.
3. These spores produce more than just more Orks, depending on the conditions they are in they also produce regular mushrooms as well as other creatures that are collectively referred to as “Orkoids”, of which there are 4 types (These also produce spores):
Squigs, which are typically represented as spheroid creatures about the size of a house cat with 2 legs and a giant gaping mouth about the whole width of the creature, though this can vary depending on select breeds. They are a dangerous creature, usually cultivated by the Orkoids as livestock and other purposes.
Snotlings, or “Snots”, which are a diminutive creature with an intelligence level comparable to a toddler. They are usually the first to arrive along with the squigs and prepare an area for proper Orks to show up, usually by making more space for the spores to grow in.
Gretchin, or “Grots” are a bit of a step-up from Snots, with a bigger level of intelligence (Though still nowhere close to an adult human). They will be the ones usually relegated to building stuff, usually under the (Occasionally very real) heel of an Ork master.
Orks, the subject of this discussion. Ork physiology is actually the complex interweaving of two symbiotic organisms that have been genetically linked by the greenskins’ original creators: one strain is comparable to a terrestrial animal and the other to an algae or fungus living within the former’s bloodstream and skin. They are omnivorous, but it is speculated that their skin contain some sort of algae that might allow them to photosynthesize when food is scarce. This would also explain their green skin which would be impossible to explain through just their partly fungal nature (It’s described as a symbiotic physiological and genetic relationship as a result of their creation) as fungi do not have chlorophyll.

I suggest that anyone interested in these creatures check out this video: Orks: War Is Life - Luetin09