I’m sticking these two topics together because they’re kind of similar.

I personally think it would be rather cool if you had an option to make your species sexually dimorphic. Perhaps the male of your species could be brightly colored and flashy while the females could be more dull, kind of like in most bird species. Perhaps there could even be behavioral differences?

That brings me to my next topic; possible mating displays.

I imagine this would be a bit harder to work with, but it would be rather interesting to see. Perhaps the males of your species could try to impress a female with either bright coloration, a crest or mane, or some sort of ‘dance’ like a bird of paradise. Then perhaps this could lead to some males in species fighting for breeding rights?

I dunno how hard this would be to work with, but I personally think it would be rather cool to experience in the game.

Yes, you will be able to make sexual dimorphism using a certain system (forgot the name of it; something like caches or whatnot). Mating displays will be implemented via the behavior programming system as Askyw stated.

Yes, you will be able to make sexual dimorphism using a certain system (forgot the name of it; something like caches or whatnot). Mating displays will be implemented via the behavior programming system as Askyw stated.

The accepted name for this system is the “caste system.” The “morphology editor” was suggested, but was limited to the Discord. It would actually be used for any kind of differing morphology, such as that of ants or bees.
This would be of course be limited by the mutation points available to your species, and the advantage in species fitness conferred by variation in a species.
In the time of society, these differences would lead to discrimination, based on what your culture views as leadership traits. The aggressive modes of governance which earlier human societies had the larger and more aggressive male gender at the head of everything. While today has progressed to a system more based on intellect and wealth, there still is some residual sexism from past cultural attitudes.
In an alien society where there are vast differences from caste to caste, gender equality may become a much more controversial issue. A eusocial society based on the same divisions earth insects do would probably have little concern for the workers due to their large numbers and presumably reduced mental capabilities. Worker’s rights would only happen under extremely egalitarian societies, especially if the queens are not afraid of being overwhelmed by them by vote (see “petticoat rule” for our human counterpart).

That sounds really interesting! Can’t wait to see that feature in the future.

what about having more than 2 genders?

I couldn’t find the actual suggestion for using a caste editor for genders. But having unlimited number of castes: Eusociality and castes would allow also having more than 2 genders.

good, but i still think that shoud be more customization

what about having more than 2 genders?

One could argue that ants and bees are the classic picture of a society with multiple sexes - the female queen, the male drones, and the sterile female workers.
Other ways traditional gender may be subverted is the existence of a hermeaphroditic caste, having both male and female reproductive organs. Hermeaphroditic castes can either be its own gender, or replace an existing one. If such a species is only hermeaphroditic, then they are considered parthenogenetic, notable examples being slugs and a certain species of lizard.
Rarely, a species may evolve differences in behavior into different sexes. Eusocial bugs are already good at this, but even chordates can join in the fun. Zonotrichia albicollis, a sparrow, is selecting towards “aggressive but doesn’t care for children” and “cares for children” as sexually-linked traits for both males and females, thus giving them four genders. The “plan” is that the aggressive ones mate with the tender ones without passing judgement on their personality like a human.
The last way a species could have more than two sexes is through “mating types.” These are only found in less complex organisms, like fungi and protozoa. The numbers of mating types tend to get more inflated, as the only requirement for successful mating is that the mating type is different.
And this doesn’t get started on transgender, non-binary, and intersex humans, which society stage may have to deal with if we’re talking about how gender works in a social context.

i like it @DPHkraken, and if we are going to talk about transgender and the likes we shoud move to another
topic.

I do not know if this has been discussed on the old forum, and i know this my bring up current events, but i believe it shoud be discussed. Also what about a 3 or 4 gendered society? I would like to know how this may effect game-play and how it will be implemented.

I can’t really think of a way to have more that two genders (capable of reproducing so trans is not in here) but I can picture a single gender society working.

their is a 3 gendered society in Star Track: Enterprise

It happens in real life https://biology.stackexchange.com/a/17376 How a Tiny Critter Has Seven (Yes, Seven) Sexes

If you thought the battle of the sexes was chaotic, you ain't seen nothing yet. Meet Tetrahymena thermophila, a tiny, single-celled organism that has seven sexes. Researchers have known since the 1950s that Tetrahymena—a freshwater ciliate... 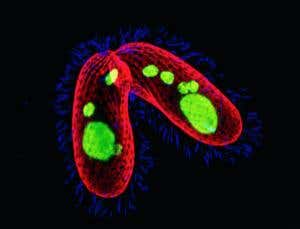 What it lacks in size, one single-celled animal more than makes up for in sexual exploits: it has not two but seven sexes


*
I really want to experiment with this stiff even in the microbe stage. Like how does that even work

Sure you can have more than one gender, but how would they unite to reproduce?

Say you have a four gendered species, do only two specific types need to unite, or do all four need to?

Read the article i linked?

I mean for other creatures that you could create in Thrive

You mean “what gender does what,” right? You could set behaviors based on gender. For example: humans have slight differences in behavior and outlook, while ants specialize their genders/castes for different roles such as labor, conception, and insemination.
For gender-based differences in pigmentation, that’s definitely possible. Same as differences in morphology like horns.

Would it be possible to make Warhammer Orks with this system?

Thats what i meant