Let’s have one of these threads again where you can just give any random feedback about the game.

If you get crashes, please copy the output from the launcher and make a new thread in: https://community.revolutionarygamesstudio.com/c/bug-reports/13

In general, after playing for around an hour or so while focusing on potential first impressions for new players, everything appears to be running more smoothly than the past iteration of Thrive. Besides the widely documented graphical bugs, such as organelles being displaced overtime, the game also looks prettier with particles and proper lighting implemented, and the update on membrane coloration is a nice touch. The zoom function in the editor is also a welcome change.
However, this version of Thrive is pretty difficult to play, and not specifically because it’s a challenging game. After a half-minute burst of life when your cell spawns in, the patch becomes practically lifeless, and you basically wander through iron clouds for roughly 10 minutes until you find a random cloud of ammonia and phosphate and reproduce. I think three of my life cycles ended up into me wandering around until my nitrogen-fixating components produced enough ammonia, which took 7 or so minutes. This issue isn’t only present when you have just recently moved to a previously uninhabited patch either; I stayed in the hydrothermal vents in a play-through for roughly 8 or 10 generations, and there was still almost no life outside that initial spawn point. This problem is prevalent enough to the extent that clicking the suicide button until you spawn near a phosphate and ammonia cloud is a much more fruitful and productive strategy over actually playing the game (don’t extract any life lessons from this previous sentence), which I think points to a general issue with the spawning or movement of other microbe species and compound clouds. You basically only see other cells right after you commit apoptosis; after that, it’s just wandering around in a barren iron-filled biome.
Thrive doesn’t need to be constantly action-packed or as densely cluttered as Spore was; Red Dead Redemption 2 beautifully shows how increasing the amount of time between interactions significantly improves game design if everything is done right. The pace of this update, however, makes all of the flaws of Thrive apparent, while at the same time hiding everything that makes Thrive a fun game behind 10 minutes of twiddling your thumbs, which I think leaves a bad taste in the mouth for anyone trying to get into the game.

Besides that, I have a few more specific things I want to bring up.

3 Likes
blackjacksike (Weird FNAF cat) May 18, 2020, 1:45am #4
I think that adding more types of respiration, either LAWK or not, could make the game both more realistic and easier to play. The more diversity there is in compounds, reactions and gameplay, the better. As for what types of respiration or compounds, I’ll think about it and tell you about it in a later post.
I also agree with @Deus that it was pretty difficult to find ammonia and phosphates without killing yourself.
Deathpacitoast (Destroyer of worlds. Eater of babies.) May 18, 2020, 11:56am #5

placing a flagella where your original cytoplasm was will mess it up.

take for example this design, its flagella has replaced its starting cytoplasm and so when i press confirm it ends up looking like this: 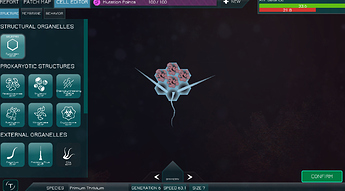 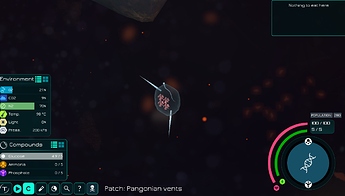 However if i am to change its design so that the flagella is placed below the central cytoplasm and instead have a metabolosome replace the cytoplasm it will result in this: 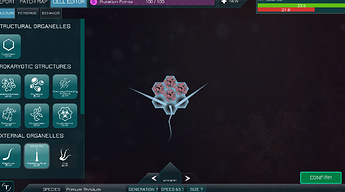 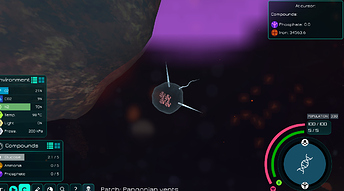 Pili are also effected by the same issue 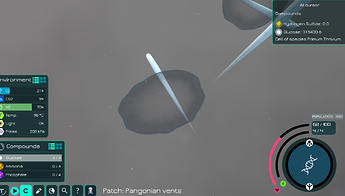 and the symmetry button doesn’t work when being used on the top or bottom of the central cytoplasm. 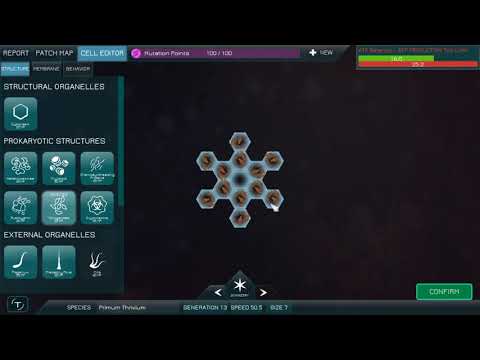 It’s great to see a new release. The game feels pretty similar to pre-Godot but with a couple nice additions. I think that once the most noticeable bugs and crashes are fixed, this game will be good fun to play. I found a couple issues that I haven’t seen mentioned before.

When you respawn after dying you only get some glucose even if your cell needs iron. I think that spawning the player with some iron if their cell uses it would be good.

I tested some spawning related things (in free build mode) and they seem to act in weird manner… On top of hydrogen sulfide, you can sometimes find iron chunks, ice shards and even cells that shouldn’t be in the patch according to the patch map. This seems to only happen if earlier in the playthrough you have been in a patch with those things in it. So if you start in the Pangolian vents, you can’t find any ice shards. But once you’ve gone to the icy patch, you can find ice shards in any patch. I’m not sure if this happens always, if it’s random or if there is some trigger for it, nor if all of these things (shards, iron, cells, compounds) work in the same way.

When you respawn after dying you only get some glucose even if your cell needs iron. I think that spawning the player with some iron if their cell uses it would be good.

If this doesn’t work anymore then this is a bug.

Fix the initial compounds not reacting to the organelles

Something i dont know if is already fixed, but:
When you take more phosphates and ammonia than you need to reproduce, they fill their compound bars, because it starts accumulate, right? But something i have noticed is if you do this and reproduce, when you exit the editor you already have that compounds filling the dna (reproduction) bar, often 100% filled, so you are able to enter the editor just after exiting it.
in a nutshell: dont make phosphates and ammonia accumulate for when exiting the editor, because theoretically you need to collect them again after finishing the editor.

It’s intentional that you can stockpile resources for your next life. So if you have enough ammonia and phosphates to reproduce twice, you can do that. Not sure if it would actually be better to tell the player “hah, nah” you can stockpile glucose for not dying after reproducing but not ammonia or phosphates, or just keep the current system.

Tecnically, in my opinion it would not work with ammonia and phosphates, because its such op reproduce 2 times in a row. But working with glucose, iron, hydrogen sulfide etc. Do we really think that its good for the game’s playability the player being able to have the equivalent of having 200 mutation points? I think if we dont get noticed by the game, the player will never discover; and if he/she tries, the player will realize that phosphates and ammonia dont work. Ive seen the same problem before in @phrenomythic’s livestream. So summing up: you can storage any compound for your next life, except for ammonia and phosphates, which are very op to do that, and we dont tell the player

. What do you think about?

I still don’t like the idea. Anyway when you reproduce you lose half of the compounds you have (as they are given to your sister cell). So you need to have double the amount of ammonia and phosphates your newly edited cell requires to reproduce. And basically if you add new organelles (at least initially) you can’t even fit enough compounds in your cell to make it happen.
Perhaps @Buckly would also like to join this game design discussion.

While that solution could potentially remedy a part of the issue, I have personally noted that it’s easier for players to just reproduce on top of a good compound patch repeatedly. Such an issue is not resolved by removing the ability to store excess phosphates and ammonia. There is probably a better solution out there somewhere.

One potential idea that comes to my mind is that the process of reproducing organelles actually takes time instead of happening immediately, but that might not be fun for particularly impatient players.

One potential idea that comes to my mind is that the process of reproducing organelles actually takes time instead of happening immediately, but that might not be fun for particularly impatient players.

Though i think that its good for enjoying more your life, especially when the game will have more features that make each life more intense and fun (maybe a day-night cycle, and some other small events, not just a cell running away from other cells, killing other cells, entering the editor and repeating that). (sorry idk if i understood your post correctly)
But anyway, very satisfied with our conclusions, happy to discuss some features here.

I’ve been trying to run thrive on my computer but it is just not loading. I’m not sure if it even a bug, it’s just not loading at all. It also says that Godot Engine is not running for some reason.

Might be an antivirus or Windows Defender blocking the game process from starting at all.

It could be. I might have to turn it off to run the game.

Edit: well $hit. I’ve disabled all of my antiviruses shields and it still doesn’t load.