I just had a flight or fight response to the amogus organism. I’m not even playing. its just scary

I don’t believe auto-evo utilizes multicellularity yet, no (I don’t have the game either but from what I’ve seen around here I don’t think so)

i can confirm that it does not do the multicell

trust me, i would’ve seen one if it could… 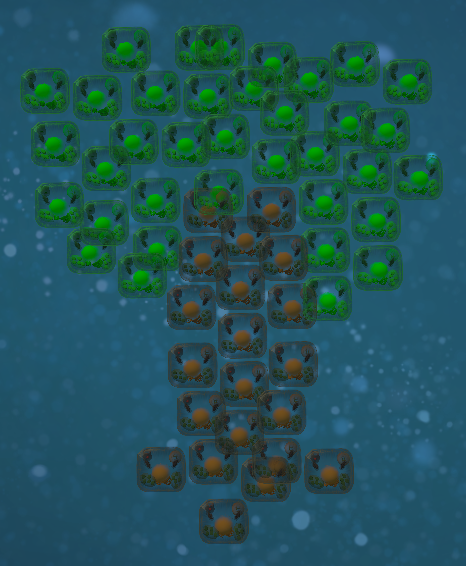 I figured I could try some pixel art, but I couldn’t do it so I just made a tree. I tried an Eevee but that was way too complicated for me. Probably someone with more skill could make something better, would this count as fanart? 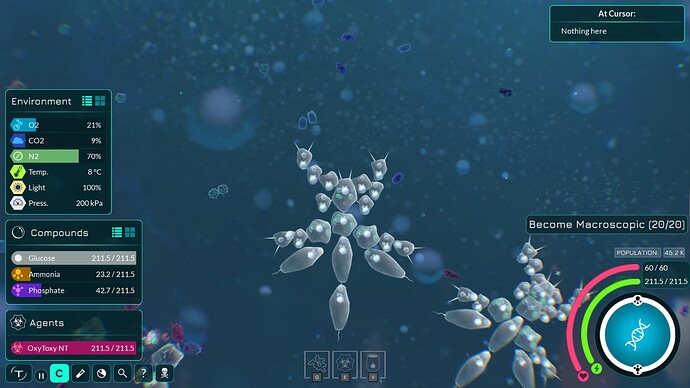 I made a bunch of different kind of cells because I was trying to test of this new editor (I check up on Thrive every couple months, so I’m just seeing multicellular stage now).

To start, connected to my stem cell, I put production-focused cells and storage cells, that had chloroplasts and mitochondria or vacuoles respectively. I also added a chain of two “movement” cells which were long chains of flagella with mitochondria. My idea was to try making cells as specialized as I could.
Then I branched out with cells I just called “segments” which were just two mitochondria with the nucleus and binding agent when I needed to connect things.
In the front, I used two segments to create arms that extended outward and put “claw” cells which had predatory pili.
In the back, I used to segments to create legs that each had a movement cell and claw cell.

I did mess up the symmetry of the arms on accident and could not fix it since there is no delete cell option, but that was okay. I still enjoyed making this almost crab-like organism.

I should note that I also tried making “blaster” cells which had toxin vacuoles hoping that they would also shoot, but it seems only the original stem cells would blast and it’s rate of fire stayed the same; the only difference was that I had more toxin production and storage.

If you do want to delete cells, from what I have gathered hitting the ‘delete’ button while hovering over a cell will do that. Maybe see if that works?