Origin of life is important question. Scientists tried to answer it for many centuries: theological theories (gods created all on our earth and humans too), spontaneous generation (like rats appear from a bunch of food and clothes), Panspermia theory (life was brought in from space), static life (life always was, is and will be) and, finally, abiogenesis (life appeared thanks to chemical reactions and physical events on young Earth).
Last was suggested by scientists Oparin and Haldane. They suggested, that a lot of time ago in Earth’s oceans were enough organic, which after created coaservates and they evolved in protocells. But this theory of primordial soup has some disadvantages.
First is water. Big peptides and chains of nucleic acids aren’t stable in water. They decay into amino acids and nucleotides. Solving is little hygroscopic particles which will take all the water and bind it. It can be clay in mud.
Second. Not much time ago appeared synthetic biology - direction in science, which task is in creating biosystems having some properties, not meet in nature.
Benner, Steven worked on amino bases (or how does this part of nucleotide names?) And created two new nucleotides. They are complementary only to each other, can interact with peptides, working in cell with natural nucleotides and etc.
So, question. Why do we have only 4 nucleotides? We can watch at properties of them. First we can see even in formula - there is a first thing - sulfur. But in amino acids they are too. Then, maybe, physical properties? Natural nucleotides have a good protection against ultraviolet radiation, when synthetic not. And water, as you know, has a good protection against ultraviolet. So, if life wouldn’t appear in non-protected areas, we would have 6 nucleotides.
Third is chemical composition. Look at table of contents of ions in sea water, human’s blood plasma and cell’s cytoplasm. 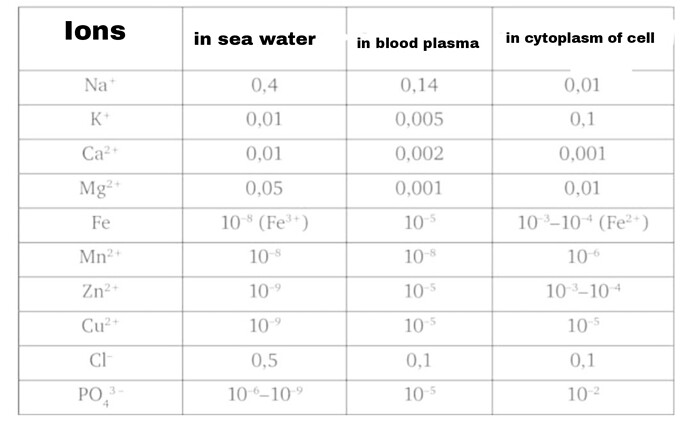 Water and plasma have many similarities in composition, only Cu and Zn cations are different in more then 10². It’s easy to realise that the first multicellular organisms lived in seas and hadn’t organs to regulate composition of internal environments. After, when they appeared, organisms had adapted to this.
Similar story is with cells. But, if multicellular organisms could filter water, seeking needed molecules, ions, etc, then first protocells absolutely hadn’t. They had got all the substances thanks to water balance.
Let’s watch on example.
Phosphorus. Every cell has it: nucleotides and their derivatives (as ATP, GTP). Without this substance life is Impossible. But where phosphorus is in nature? Apatites and phosphorites. Them on Earth enough, but the main problem with it (why in seas not a lot of phosphorus) - they are poorly soluble and insoluble salts and chemically inert.
There are two ways to get it: meteorites, having a little phosphides (in two types of asteroids is Fe3P) and after reactions get soluble ions or volcanoes and associated with them Geothermal vents. Mud volcano is one of types of Geothermal vents. Apatites in warm decay into the different oxides, which exit the volcano in gases, but soon besieged near. Earth near to them is full of soluble forms of phosphorus.
And many many many advantages of theory of primordial pizza (it’s named so because water in them regularly evaporates, so stay only particles of clay with organic on them). Many important chemical reactions, some phenomena are possible only in mud volcanoes or near to them. If you are interested, i’ll write the most part. I have a good book, but i don’t know, is it on English and other languages.
And there is third theory - mayonnaise. It’s based on theory, that in ancient times were protomembranes - lipid bubbles. They would protect future RNA, peptides etc against different adverse effects. But it has a lot of critics, main problem is “eating” - nucleotides can’t go through those membranes. But it’s still alive because (4 8 15 16 23 42) it can explain how RNA developed.
There are some works, combining pizza and maionnaise, but pizza stays a leader.
Scientists are too hungry:D

A bit weird start to the post, considering we are on the thrive forums.
Regarding the mud volcanoes, I didn’t get the theorist to reply here, but they basically said that mud volcanoes are quite laughably outdated idea now, the still good theories are: deep sea hydrothermal vents, and warm ponds.

Agreed, weird start.
Can you ask, why is it outdated?
It gives a simple way to get all needed elements in accessible form. Hydrothermal vents are good, but how to get so much phosphorus? Carbon - ok, oxygen - ok, hydrogen - ok, nitrogen - will be, sulfur - perfect. But phosphorus… has water in hydrothermal vents enough phosphorus to create enough nucleotides?
I know two good theories, they explain appearing of organic acids thanks to ferrum sulfides or zn sulfides, but there nothing about P in accessible forms.
If i mistake, tell me about it, please

I would just pitch in, to put out the thought that.

Early earth had a lot of volcanic activity, and fumes were thrown around like CO2 and plastic today.

So sulphur could have gone around from the core into the ocean and eventually near the hydrothermal vents.

Let me know if I have got it wrong.

You are right.
Actually, after collision with Teya (it’s proofed. Radio analyses showed, that Earth and Moon have similar composition of isotopes, but meteorites have another) Earth had really dense atmosphere, composed with CO2 in most. So carbon dioxide was absolutely everywhere.
Main theories about life near to hydrothermal vents are the theories of… I can’t name them as they are, but they both need Sulfides: ferrum (2) or zinc (2).
Near to them (vents) a lot of sulphides: look at there black water (with T≈400°C). It’s black because of sulphides. So, it have enough needed metals and sulphur.
But not phosphorus…

I would have to ask for details. I rely on the theory team people to know their stuff so that I can focus on the technical implementation. Sadly here or the community discord doesn’t have many (if at all) active theory team members. Probably has something to do how many cranks these kinds of topics attract, and for an expert discussing with those people is likely intolerable.

Big peptides and chains of nucleic acids aren’t stable in water. They decay into amino acids and nucleotides.

Not true. Otherwise, scientists wouldn’t have been able to isolate and replicate DNA the way they’re doing it now.

Only certain kinds of proteins are unstable in pure water. Some proteins are so stable that they don’t denature in boiling water. (Steady as a rock)

Though I would like to get a source that suggested water can degrade biomolecules into its component building blocks. I get that water is a fairly reactive chemical, but I’d like to think that is what makes it an ideal solvent for life.

amino bases (or how does this part of nucleotide names?)

we can see even in formula - there is a first thing - sulfur.

I think you meant phosphorus. There is no sulfur in nucleic acids if I recall correctly, unless if we’re talking about modified RNA (one oxygen atom in a uracil base is usually replaced with sulfur).

nucleotides can’t go through those membranes.

Here’s a crude animation that explain one model of how nucleotides can go through a membrane.

I can understand your experts, @hhyyrylainen.
If you don’t mind, I’ll tell details later. Possibly, nearer to 11th may. My book stayed at home, there is all information, i told you here. 2016. Author has different awards thanks to it. And that’s why i asked about reasons of “Outdate” of theory. It has many good concepts of appearing RNA, possible to fast replication.
As i know about peptides, they really stable. Here is my mistake. I meant peptide bond. When in environment a lot of water, bond isn’t stable absolutely and in nature, usually, it destroys and creates with similar speed. Peptides have many bonds, helping to create hard forms needed for right work (remember about a and B forms of peptides).
I suppose, yes, nucleobases. On my language they are amino bases¯_(ツ)_/¯
I mean formulas of alternative nucleotides. They are here 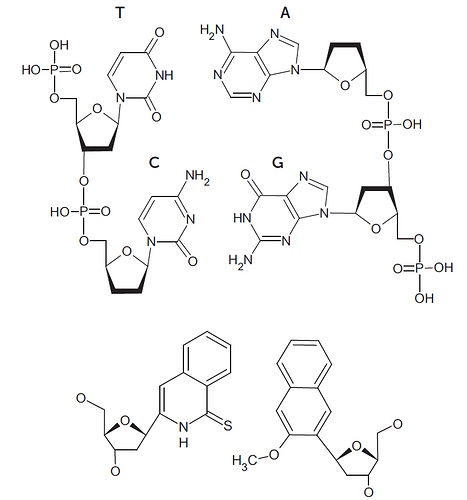 Nilitin1774×827 37.6 KB
And about lipid membranes: you see, how low chance of getting in? I don’t think, it wil work so. Even if this happened, i think, in environment created much harder chains, having more nucleotides. And they have much bigger speed of creating it.
Quick Question Thread