. I mentioned I wanted to do this a while ago, so here it is.

Starting 12,000 years ago humanity exists and is doing things
Here’s a map I spent ten minutes editing from the one on Wikipedia (red is unorganized villages): 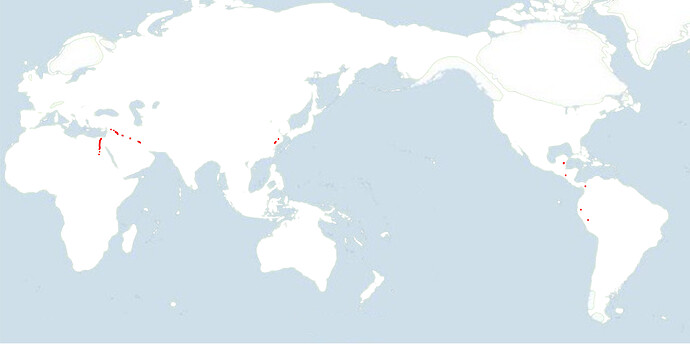 The rules are such:
you make an event, such as a religious reform, war, new technology, establishment of a state, genocide, cultural movement, ect. (No more than five in a row by the same person, and all must be set after the first event of the previous person) the format is such:

(Date): (the event) (immediate consequences, optional)
For example: 12,000 YA: everywhere on earth, the ice age is ending. This is causing people to begin farming in river valleys all over the planet. (That’s canon btw.)

After this others may make new events, either unrelated to anything, or caused by yours/someone else who posted. You don’t have to specify it’ll be pretty unprofessional and implicit.
The only restrictions on what you can add are that: no implicit hate speech, the people of this world can be deeply racist or homophobic or such, but I expect you to speak about it in a detached way, nothing unrealistic, I expect no stone age nukes, Siberian rice farming, or Congolese empires (until tonic water and such is made at least), and finally, that it adds something meaningful. Don’t be boring. Every once and a while I’ll compile a new updated map, or write a master doc or something. If you’d like I can make a flag for your favorite empire. I’m pretty good at those.
Starting premises:
Andean and Mesoamerican people’s have just started farming corn.
Mesopotamian and Egyptian people’s have just started farming wheat.
Chinese villages are forming to farm rice.
And finally tech is Mesolithic in Eurasia, south and central America, and North Africa. Paleolithic everywhere else.
Alright, please have fun and rewrite history!

11,820 YA: Jackles spread to egypt, and begin a trade relationship between Levantine fishing villages and nile delta villages.
11,800 YA: the Levantine village of Ljirico becomes wealthy by way of having a peer for boats to dock at and trade with.

11,780 YA: first wooden cabin created in the Levantine village of Ljirico.

Thanks for editing to specify where it was.

thought it would be better

11,630 YA: Ljirican villagers begin to compete for access to imported wood to build sturdy homes out of. The town splits on class lines into the wooden areas, and the tents/hut areas.
11,630 YA: Indus valley is populated by mesopotamian people’s and Iranian tribal groups.
11,600 YA: the begining of a large-scale migration of the mesopotamian people’s to the lands of Persia (Iran), Anatolia (Turkey), the indus valley (like Pakistan I guess), and Libya (Libya) this has probably prevented the formation of cities for a few hundred years by diluting the people supply.

11,580 YA: The first Tempal wats build in Ljirican
11,570 YA: Part of people migrated even farther to the india semi-island and on to the south east asia, sreading knolege on bulidng and jackels in them
11,560 YA: VIlige Sh’ang wast build in south Japan

11,590 YA: Houses built of stone and clay appear in mediterean and mesopotaniam settlements

Reply to both previous responses: Sh’ang will have to be a small fishing village as rice farming hasn’t been brought over yet. Humans have been in England for a few centuries at least, as it is as of yet still connected to the rest of Europe by doggerland. The land bridge is closing right about now though. I have it planned to disappear at about 11,500 YA. Edit: and also fralegend, I like the events so I won’t penalize you, but your events have to be after the last person who posted’s events.

11,540 YA:
Emos from Austarila escape to the wild of south-east asia becuse of Human movement from austarila.
11,530 YA:
Boat was reinvented in south-east asia
fast deforestation happening in the Levant, Ljirican start to use dry dirt-blocks as building instead

aka: it mean to be a fishing villige, agri still not intedost there

11,500 YA:
Rice and rice cultivation is introduced to japanese tribes
Predators around settlements start being hunted to make the areas safer
A war starts in mesopotamia between two cities for controll over fertile land

11,490 YA:
Genyornis because demasticaded in Australia and save from extictin.
One of the “city” in Mesopotamia lost the war and destroy, becomes ruin in the sametime the winner rebuild an new one.
Rice use in japan spread quickly , expanding especially in Sh’ang

i little bit crazy i get there

American populations migrate to north and sud america importing corn with the
Bricks made of clay and wood fibres are made and become popular in mesopotamia
Zamug, the sumerian city that won the conflict, starts building fortifications using bricks

11,440 YA: First town was made from the village of Ljirican

11,400 YA: first copper discovered in a cliff near the town of Ljirican

11,390 YA:
Zamug starts a war with another city in order to controll more land

cites dont exist yet, at most well armed villages, so i’ll say thats what you meant. also how was rice introduced? by who? the chinese boating skill amounts to riverboats that dont work in the ocean a the moment. (if you really want to then we can say they discovered root vegetable farming or something. it wont be as good but still, you’ll get more interesting.) slow downn- i cant wait either but take your time.