i hope my posting wasn’t for nothing

Those are cool ideas.

Though I hope you don’t mean like vehicles already built for the player. The whole idea of Thrive is to have as much freedom when building things for the creature you spent billions of years evolving.

So you mean like a category of ships, right? Where you build one for that specific archtype?

I see what you mean.

Nice ideas. I think we will basically make a kind of lego set of ship parts so you can make what you like. So all of these, and much more, should be makable. That’s my hope.

also RoboRomb yeah what i meant was that you could make anyship design you wanted but you’d need a special function part to make it do its function.

You just realised after 7 months?

Well, Mister Sentient Xenomorphian, I guess you did just notice it after 7 months.

Here’s an idea for a sort of scout ship and or science-ish ship. As in the probe. Will you also be able to decide the basic idea of interior of ship ex: storage bays , equipment so you could do a more balanced ship? Like a insanely huge dreadnought with lots of mining lasers? 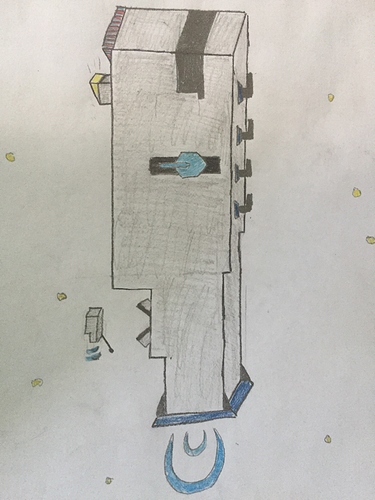 The individual components and modules to attach?

Makes sense, I don’t reckon there’d be a generic “laser cannon” function part. You could assemble some separate parts (“photon lens” “targeting mechanism” “coolant intake” “power reservoir”), save that, then go back to the ship you were working on and add some to the hull.

Cool stuff, but where would all this have to be assembled? Obviously not all models can be built on home land and the leave the atmosphere, so would you need to send parts to a space station and assemble it there? There’s also the whole landing on foreign planets and coming back, but I guess that can be solved by just making a tiny ship designed and prebuilt for that to go there and back.

I think we can use ISS as an example.
"When ISS is completed it will cover an area as big as a football pitch and weigh 455 tonnes. It would have been impossible to build ISS on the ground and then launch it into space in one go; there is no rocket big enough or powerful enough. To get round this problem the Space Station is taken into space piece-by-piece and gradually built in orbit, approximately 400 km above the Earth’s surface. "
So you would design the entire ship in your tech editor and then you would start sending its components, parts and materials into orbit, where they would be put together automatically. So basically you design it, make a piece, send it into orbit, make a piece, send it into orbit, rinse and repeat.
As for the landing, these giant things would be in no way able to land anywhere. For that, you would have to design another ship - a much smaller one.
Also, I imagine that once you make something yourself, it becomes available as a “part”. Have you ever made a cannon? Then you can just slap that bad boy onto your ship, you deserve it (the resources would still cost the same, to make the player want to be efficient with their designs). What this means is that once you design a ship you just can give an order to make 10 of them, 100 of them, whatever you want. Also, I imagine, once you make something, you can always open the editor and edit that thing. Because technological progress. So even technology would have “generations of evolution”, (more like marks), just like cells or.

One thing re this is that I think you’ll be making larger scale decisions at this point. You’ll be the leader of large nation rather than a rocket designer, so you might click a button for “launch space station” and pay the cost and that’s it. I doubt you would have time to manage the process of actually building the space station.

But of course nothing is fixes yet for that late in the game.

The system still needs to allow the AI to make procedurally generated ships that don’t suck.

Maybe Thrive can have a similar thing to the Sporepedia, where people can publish their creations and share them online, and the game takes a random few instead of procedural generation? Either that or the devs have to make a few ships themselves for the AI to use.