I’ve heard of alien invasions that occur during the civilization stages (society / industrial / space), so i’d like to elaborate on it.

So an invasion could randomly occur, is the player given a specific warning that a foregin battalion of ships are in close proximity of your homeworld or through a series of events? If they do happen to stop by, would they enslave your species?

Would there be a certain way you could defeat them, or if by chance the invasion doesent happen at all, how would you do it?

The most obvious is how the species would invade you. They would likely head for your largest cities, decreasing the population. Then they would destroy any sort of military base to stop any of your reinforcements.

If theres more to this topic, tell me. I’d like to know more. I swear to belgium if any of you give me a thrive soundtrack theme for this I will cut you. 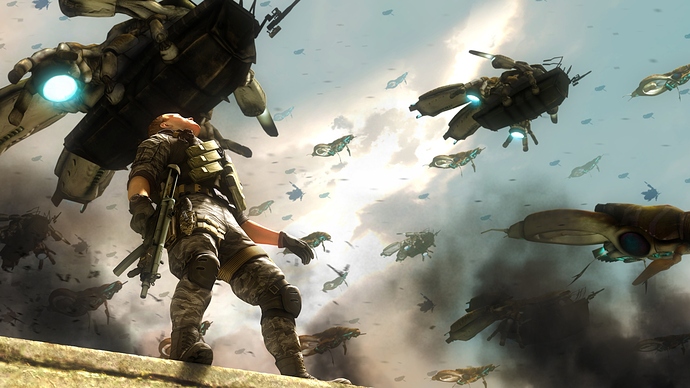 To be honnest, I think your idea is quite complete, but after such an event, I think a sort of resistance or rebellion would happen (that’s one way of crushing the ennemy). Maybe diplomacy would be a way to prevent that even if it is generally thought unlikely to succeed with diplomacy in such a case.

Yes, what you’re saying is correct. But there are two sides to this:

You’re the species who have been enslaved by an entirely different, more advanced, race.
(Rebellion)

You’re the species who have enslaved an entirely different, less advanced, race.
(How do you deal with Rebellions? Obviously use soldiers, but what happens if they succed?)

If they succeed, you have some options :

I think it would be best to leave, then bring back re-inforcments. Then just send a whole fleet to the designated planet to teach them a lesson.

If possible, you could clone the enslaved species, and just continue your reign. But other times, with a change of heart, you can just leave them alone to celebrate. Though they would track your species down to eradicate you.

We all have our own way to choose. However, there is an infinity of possibilities, decisions, causes and effects. There is so many choices.

So many choices, and yet we don’t have to make those choices because the game we’re talking about is literally in its microbe stage.

Indeed. But it will be much more advanced in some years.

Probably like 2 years from now, it may be close to the multicellular stage.

Yeah yeah yeah (sorry, the website wants me to put more than 10 characters)

In my opinion the technology difference of an industrial species compared to interstellar travelers is so huge that there is just no way to fight them.
Imagine if the earth was invaded right now by aliens that carry personal shields that not even our nuclear weapons could break and they had assault rifle sized rail guns. They could just wipe out all the militaries and as we couldn’t kill a single one we would have to be very lucky to be able to steal just one weapon from them that could hurt them. So basically we would be totally screwed.

So I don’t think it is good to have random alien invasions because you couldn’t fight them realistically. I think you should only be able to encounter aliens in the space stage.

Immune to everything, everything except a single plane carrying missiles blowing up the ship’s core. Delightful. Seriously though, I think that perhaps Alien Invasions should be extremely rare, making them less of an annoyance and more of a novelty. Blessed by the gods of chance! And perhaps said alien invasions should seem flawless, but should have a small, almost comical weakness (bacteria, satellite tv, Mondays, etc).

If I were to invade another species, i’d likely just start controlling their government. I would intergrate my soldiers as a type of civil protection or police force. They still enslave the species, but atleast care for them in some cases.

Seriously though, I think that perhaps Alien Invasions should be extremely rare, making them less of an annoyance and more of a novelty. Blessed by the gods of chance!

You are very right. I was thinking it could happen at some point in the Civilization phase, but just a part of the playthrough. I like the idea of random things happening by chance.

If you were to attack an alien race, you probably shouldn’t even use weapons. Just use shields they can’t get through and then you might as well just stab them a couple times with simple knifes/spears to make sure they won’t get access to weaponry they can use to fight back. (and if they do manage to beat you, just nuke the alien scum from orbit)

But, I think it should be a possibility, just have the users be able to toggle them on or off (same as with other game-ending disasters)

They could just wipe out all the militaries and as we couldn’t kill a single one we would have to be very lucky to be able to steal just one weapon from them that could hurt them.

Before saying anything I just want to say this is all crazy rambling ideas that mean nothing.

I quite liked the idea of the enslavement from the OP. I like the idea that one option for the space stage is to start early in the galaxies history, where it’s basically a 4x and all species are on equal footing.

And another is to start late where there are already established star empires you have to deal with from day 1. Being an enslaved low tech race could be like being a lowly count in CK2. You just have to work your way up the ranks, gaining tech where you can, fomenting revolt, doing sabotage events etc until you can get your freedom, or until you take over the space empire.

One super crazy idea I had for it was “the more advanced a tech is the more unstable it is”. So think about how easy it would be for humanity to lose the ability to build the LHC at Cern. It required thousands of physicists and engineers all working together to make super cooled magnets with large pools of liquid hydrogen and datacenters that can handle terabytes of data over short time periods etc.

Now imagine how hard it would be to make some super advanced alien thing? Like a dyson sphere or something. If advanced technology is unstable and easy to lose in a crisis then it would make the space stage really dynamic, with great empires rising to new technological heights before falling back into the boiling chaos of warring states, that tech all lost, for now.

There could also be quite a lot of these super advanced techs which require >100 planets of coordinated effort to build and that would give the game quite a lot of replayability.

Now imagine how hard it would be to make some super advanced alien thing? Like a dyson sphere or something. If advanced technology is unstable and easy to lose in a crisis then it would make the space stage really dynamic, with great empires rising to new technological heights before falling back into the boiling chaos of warring states, that tech all lost, for now.

Imagine if the earth was invaded right now by aliens that carry personal shields that not even our nuclear weapons could break and they had assault rifle sized rail guns. They could just wipe out all the militaries and as we couldn’t kill a single one

Well, this is a scenario that is similar to the Seven Hour War in Half-Life. Despite their more advanced technology and security, Dr. Gordon Freeman succeeded to destroy an entire tower for the Resistance. But he wouldn’t be there if the G-Man didn’t hire him. However, even if [Morgan] Freeman wasn’t in Half-Life 2, there would be a formation of a rebellion or resistance anyway. So, there might be a chance to make a rebellion with (higher probability of success) or without (lower prob) other alien/unknown civilizations or organizations.

we would have to be very lucky to be able to steal just one weapon from them that could hurt them.

Or we would have to be smart and well prepared.

Nice to see someone mentioning Half Life 2 on the forums (excluding me), but you’re exactly right. The Combine, or Universal Union, were a mutli dimensional military organization, capable of entering dimensions with ease. In the 7 hour war, they used the synths (snyths being a cybernetic military machine, deriving from the term ‘synthetic’) to fight off Earths military forces. They took control of the planet in just 7 hours, hence the name 7 hour war.

The combine are a near unstoppable race, but with the help of a crowbar-wielding maniac in an orange costume, I think they may not have a chance.

I believe that a random event like the alien invasion, during any age of play, is right that it is present. It must be a fairly rare event, but it must be there.

The probabilities of invasion should increase if we find ourselves in an industrial phase where technology starts sending radio waves in space (even involuntarily because of the first radio communications).

The chances of invasion should increase even more if, after the discovery of the radio waves, messages are sent in space or to certain stars in the hope of finding an answer. (For example our SETI)
In this case, one could also receive a response message from another civilization that is still in the industrial age / the first space was still impossible for space travel.

Trying to be a little more meticulous than Stellaris, I believe that an industrially advanced civilization / early stage phase may have some chance with a young space civilization.

A young space civilization may have not yet discovered the technology of space ship shields, making them attackable by nuclear attacks.

A young space civilization may have been automating their industries with robots, but perhaps they have not yet managed to create robots that are sufficiently efficient to deal with military tactics elaborated by sentient beings, thus preferring to send soldiers of their race to the planet’s soil. .

I think the only scenario of confrontation almost on a parity is this (despite the young civilization space remains in clear advantage at 80/20 - 75/25).

But if instead the primitive civilization was found in any other phase, or if the young civilization of space was more evolved, there would be no possibility of victory for the defenders if not more or less long periods of vain resistance.

What do you think?

P.s. sorry for my bad English