[TOTW] What are some interesting real life microbes you would like to play as in Thrive?

Heres our newest edition of “Thread Of The Week” :
For me i would like to play as the Stentor it is my favorite microbe, it basically has a cilia powered vacuum mouth and has a “stalk” that can latch onto twigs and rocks and it can stretch out to catch prey , like crazy far away and when attacked it stretches back in a millisecond I it’s like a microbial piranha plant.

[TOTW] Most Desired Features for 0.4.1 and the Future! Future Game

So to kick off the Thread of the Week [TOTW] discussions I thought a reasonable one might be to mirror a discussion we are having on the dev forum at the moment. Feel free to post in this thread: Which features are you most excited about for the microbe stage? Which features do you think we should be prioritising now? Remember we are looking for features which have a good effort to awesomeness ratio, so if it’s easy to make and is going to make a big difference then it’s a good thing to focus …

Personally I would like to play as a plant cell with a really strong cell wall and lots of defensive organelles. I want my cell to be able to survive in the harshest of conditions so I basically can relax while I sit behind a cellular maginot line.

The goal is to link it to real life microbes, i mentioned the stentor for example.

I’ve liked this idea ever since ~sciocont suggested it many years ago: calcium-producing microbes.

The idea is simple: give your cell organelles for synthesizing calcium carbonate from compounds in the environment and a modified agent secretor which spills the result into the tidepool on the player’s command. The catch would be that it solidifies in the environment and sticks to existing solid calcium carbonate blocks, giving the player the ability to build their own calcium-based microscopic structures.

The possibilities are endless. Cellular shells, enclosures to herd and protect other cells from predators (maybe if they produce a compound you want), abstract art. Providing movement control is fine enough to give the player creative freedom, I think this would be a really cool strategy for them to have.

One of my favourite microbial tricks is bio luminescence, which is really cool.

an amoeba yep Just an amoeba

Myxococcus xanthus would be pretty cool.

IDK how to make it just show the video like the vida above. But the link just shows E.Coli getting rekt… It’s kinda scary how a group of little things can just annihilate others with so much ease.

If you just put the link on a line by itself it does that embedding thing, if it is a supported site. I edited you post for you.

Would be cool to see Geobacter sulfurreducens, essentially a bacteria which breathes by coupling the oxidation of organic molecules to the reduction of certain metal salts/solid metals.

They have these really neat conductive micropili, maybe evolving from this microbe could add some cool extra features/traits like being able to integrate into electrical equipment/tech easier later in game(Creature, civ and space stages?).

Interesting, we are planning on adding a form of chemolithoautotrophy to the game for 0.4.1, in this case its bacteria that reduce iron.

lacrymaria would be cool:

This would be cool too:

An ameoba with a well defined shape and a “shell”

I mostly want to play bacteria, but elsewise: Euglena gracilis would bit lit 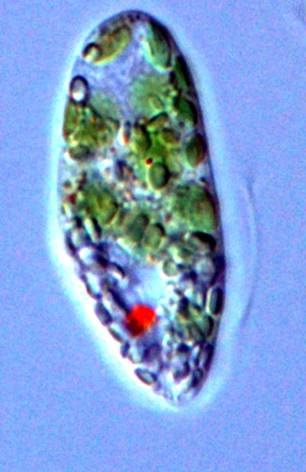