anyone can announce games that they are making here.
“what makes this different from that other game thread?” you might be asking.
the difference was that the other one was only ideas, in this one you can only announce ones you are actively programming.

I’m surprised this thread wasn’t made yet.

Anyway a game I am working on right now is a fnaf styled game and we are currently discussing the mechanics. We have already made the animatronics and the map. Technically this is still not in the idea phase because @TeaKing, @Nover452, and I are actively working on it now.

Interesting. I was expecting this to be one of those threads where no one can actually post anything relevant to it. I’m pleasantly surprised that there are community members working on a game (who weren’t already thrive developers).

yes not only that, us , evo4weak and zenzone are working on a game too

Don’t share the secrets other than that. Remember that one time I accidentally said what the game was about in the Book Idea thread?

I’m writing a M.A.R.S. clone. The difference is that it has networking support, is written in Godot and there will be no borders in the world (you can still run out of fuel, though). Also, the only human that can make changes to the official M.A.R.S. repository is yet to return after he went missing, so my game will probably have its own feel (I’m currently rewriting what I already wrote, because a torroidal map was a terrible idea (8 copies of everything slowed the game down too much)).

When will you be joining the Thrive development team?

I have no experience in C#, but it shouldn’t be too hard to learn (I know GDScript, Python, C, a bit of x86 Assembly and recently I’ve been learning C++).
Problem is, the exams are coming closer and I have never really contributed to a larger project. Also, I take my time for almost everything (most of the time is spent reading docs and thinking about how everything will be implemented).

The good thing about using not our own engine, is that in cases like this, it’s the Godot developers problem that it doesn’t work on your computer.

I’m working on an simple rts in Unity right now. I’ve already got units that can move and attack each other, and a procedural terrain generation system. I have the graphical skills of a potato though so don’t expect it to look pretty.

what game are you exactly talking about?
i tried search for mars game and i dont think i found the game your talking about

I think he’s talking about surviving mars or some game like that.

Edit: wait I searched up m.a.r.s linux and it was some kind of shooter game

Sorry for not responding. Yeah, it’s the ridiculous shooter. The music, explosions, colors and confusion is what makes the game great. It’s been abandoned, though.

I hope y’all don’t mind if I use this thread to post some things about my game. Here’s a picture of a procedural Island! 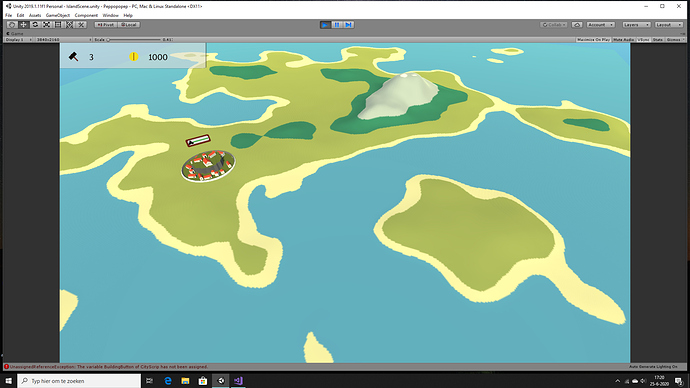 That looks pretty good! One nitpick, the shores on each island look noticeably lower quality than the rest of the structures. Still, great work.

Excuse me for hijacking this thread (if the mods want I can make a seperate thread for my game), but I’m really excited to share a little demo version of my game. It’s not much, I basically made the minimum features neccesary to be considered an rts, but I’m still kinda proud of it because it’s my first game. I might add some more advanced/unique stuff later on.

For now the demo includes: Procedural Islands like the one shown in the picture in my post above, a main menu including options, buildable buildings, units that can move and attack, and an AI to play against.

In case some people want to try it out for themselves this a download link to a setup file: http://www.filedropper.com/sentiantgamesetup

In lieu of an in-game help page I’ll expalin some stuff here. Basically the goal of the game is to destroy the enemy city, while preventing him from destroying your city first. In order to do this you’re going to need soldiers. Get these by clicking on your city, choosing ‘Recruit’, and clicking the sword icon. Each soldier costs 50 money. You should start with enough to build one. To get more you should build some mines: Click city, choose ‘Build’, and click the money icon. Each mine costs 5 of the little hammer things, which you get for free over time. Good luck!