What Do You Hope To Create?

Correct me if I’m wrong, but I think it’s safe to say that we all like the idea of Thrive. And because we like the idea of Thrive, we have visions of what we plan to create/do in a more developed, more in-depth Thrive. I’m 99% certain that everyone here has seen or thought of something that they would like to recreate in Thrive. For example, I’m sure a fan of Star Wars has visions for a certain play style in the space stage, and I’m sure a dinosaur geek like me wants to create a dinosaur-esque organism.

Hopefully, these thought experiments will eventually turn into inspiration for our different visions of what we want the game to play like.

So the prompt is simple: what do you hope to create in Thrive?

I’ll start. As a kid, I really loved the Monster Hunter series, especially Monster Hunter Tri. I would really like to create a creature similar to a Lagiacrus, a 90 foot long crocodilian-esque leviathan of a semi-aquatic megapredator capable of generating electricity. Here is a picture: 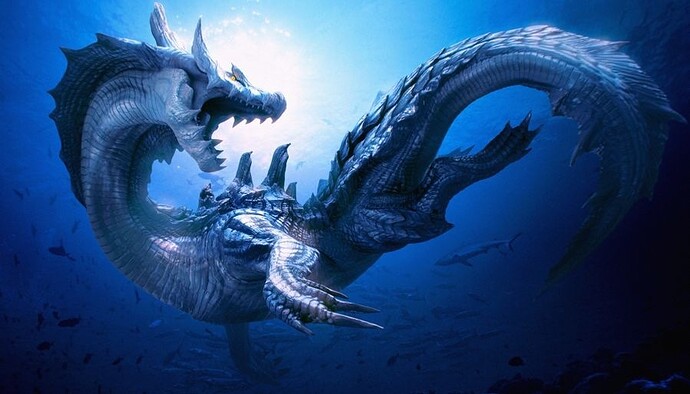 I realize I really like the idea of evolving an animal adapted for multiple forms of locomotion. So for example, I really like the idea of an animal capable of both flight and rapid movement on land, or capable of doing well in water and in the air, in water and on land, etc. I guess you can see it in the above creature idea. I’ll probably end up going back to Monster Hunter for inspiration a lot, as they have really impressive creature design.

Beside that, I probably am generally going to stick to a theropod or avian body plan for a lot of my creatures.

How about you guys? Keep in mind that it doesn’t have to be specifically an aware stage thing. I also would like to recreate a honor-dominated, medieval-Japan sequel alien society similar to the Elites in Halo for an example.

What do you hope to create?

NICE- yeahh that looks great. I plan on trying to push boundaries and and limits, yk, planet sized organisms to crash my potato pc, sound barrier breaking. but more seriously theropods with ramjet respiration and springs for bones. aka idiocy. fun though. i also want to play mollusks. (attempting underwater civs and land squids)

I’m really interested in that grey middle area between sentience and sapience. That zone where there really is no telling whether something is an animal or a person. Where tools, knowledge, and community are all utilized, but there is no undeniable proof of civilization. I want to create a creature that reaches that point, and to question what humanity and sapience even means.

I wanted to recreate the industrial revolution

Originally, years and years ago when I first discovered this project the idea that came to mind was a larger creature made up of smaller, specialized creatures similar to a land dwelling manowar or a mobile hive of insects. Now, I’m not sure that will be possible, but the idea never left me.

As for a more conventional creature, probably something with as many interesting and useful features I can reasonably give it; probably tentacles and camouflage, a sort of tree dwelling venemous octopus, preferably omnivorous for the benefits it gives to forming a civilization later down the line, but primarily an ambush predator for the fun of it. The more I think about it the more I’m essentially designing a bundle of connected snakes, and I kinda like that.

While I’m not that interested in making any single organism in particular, I am interested in what kinds of ecosystems could be emerge, one in particular I’d like to see is one based around thermal as the energy source, rather than light, for example underground.

What I want to create: a creature that stores hydrogen in it’s gut so that if anything attacks it it will explode!

that could be like an electric eel, that uses electrolysis to create highly flammable gasses in a special organ?

that could be like an electric eel, that uses electrolysis to create highly flammable gasses in a special organ?

Or it could just use some of the left over hydrogen from the water it consumes.

As to what I hope to create, I’m trying to make an entirely lithotrophic cave ecosystem and think thrive would be a very interesting way to do that.

As a side note, does anyone know if you would be able to have NPC’s do similar runs of evolution (at least up to a certain point) of a players past run? Asking because if I have some organisms already evolved that I would love to include in the experiment that I know wouldn’t evolve (or at least, the chances are astronomically small for them evolving in any one given iteration, much less all I the same one.

I assume someone would make mods for that. Making your own npcs is an obvious choice of mod if it’s not vanilla.

Just had a thought, whenever it eventually comes couldn’t you do this in the ‘ascension’ stage? Not have NPC runs but direct certain facets of life in the directions you want?

I have no idea how it will work obviously but I believe it did say you could ‘direct the evolution of other life,’ right?

I hope to create a vary diverse ecosystem where most of the creatures look like they aren’t even remotely related to each other.

I want to make a siphonophore mixotroph with zooids for as many types of autotrophy that can reasonably work together. And later on voltron-like spaceships

A race that only uses living things instead of metal or stone tools, and made it to space by breeding animals for that specific purpose.

Maybe they can live… Underwater