What made you like Thrive when you first encountered it?

I’ll start by saying that images and soundtracks it delivered truely show what life and evolution are capable of and how amazing and beautiful they are.

Edit: Some posts might serve as help for developers to improve the game

My love of Spore. And the want for a more scientifically accurate Spore. Oliver’s documentary on Thrive on YouTube was how I found it too, he did a really amazing job talking about it’s history and what it hopes to achieve. Plus I have a soft spot for games that are in development

I like Thrive as an attempt to become one of the first evolutionary life simulation games after Spore. What’s fascinating about Thrive is that it has not come down for years as an open-source game and still stands on its own to become a kind on the genre as a successful game.

There was a time when I became obsessed with Spore. I saw a lot of videos about and such, but I couldn’t pay because EA, so I tried to look for alternatives, and by that I mean google (Or scratch) “Spore online free” And I even found a browser version of spore creatures, it’s a weird game . Until one day, I was browsing Youtube, watching some Spike Viper powder toy videos when I saw in the recommendations “WILL THIS SPORE 2??” Obviously I clicked, I was desperate, and that’s when I saw thrive, I remember that I didn’t even see the entire video, I clicked on the site and started reading everything. Like, everything, but my dad wouldn’t let me install it, because “FREEWARE = ​​TROJAN” And since it wasn’t complete, I just forgot and moved on with my life. I remember going back and looking at the Steam community tab, which is the least active part of the community, and it made me think the game was deader than the rage comics. Until the other day, I was browsing Youtube, when he recommended oliver’s video to me and I thought “Belgium I have to play this” But I still had that FrEeWare BaD question, so I made the forum account to ask and the rest It is history

I seriously wonder what percentage of the community found out about the game through Oliver’s video cause it seem the all mighty YouTube algorithm has blessed Thrive and is slowly starting to get more and more publicity on YouTube, watching gameplay is really fun and entertaining, at least to me. I’ve learned a lot of tricks and tips from watching other people play and get build ideas or challenges from them to do on my own. The wiki even made a whole time period because of YouTube of Thrives history.
(Go down to where it says “Seventh Era: The YouTube Boom”)

The following is an account of the project’s history, in broad strokes, as best remembered by those members of the team who took the time to write those events here. Many of the events early in its evolution are uncertain as the users who witnessed...

I have an intense love for biology and evolution, so of course, I loved thrive’s whole concept when I found it (for the second time) back in early 2019

Thrive and is slowly starting to get more and more publicity on YouTube, watching gameplay is really fun and entertaining, at least to me. I’ve learned a lot of tricks and tips from watching other people play and get build ideas or challenges from them to do on my own.

I see some new history is being written.

Sadly I think the effect of Oliver’s video has pretty much subsided now. It really helped that Lathland picked up Thrive and made a few videos, that gave us another big spike. Now that is also fading. I hope we’ll get into a situation where reasonably large Youtubers are playing Thrive every week so that we don’t rely on huge spikes anymore but instead have a constant level of buzz.

Like many other people here, I found Thrive because of my love of Spore. I started playing Spore when I was quite young and I’ve loved it ever since. Spore is my favourite game of all time, and it wouldn’t be an exaggeration to say that a lot of my fascination with evolution, the Universe and biology was caused by Spore.

I have always wanted there to be a sequel to Spore (and part of me still does), and I used to search the web for games trying to tackle the same concept as Spore. In 2019, I watched a video called “Spore 2 - A Simple, Plausible Approach” about if a hypothetical Spore sequel was made, how would it be done? In this video, a interesting game was mentioned called Thrive, which I thought looked like an interesting microbe simulator and I made a mental note to check it out later.

Quite a while later, me and a friend were both playing Species: ALRE (an interesting ecosystem and evolution simulator) when I remembered Thrive. I mentioned it to him and I searched for Thrive on the internet. I (somehow before I found the main website) stumbled upon this image made by QuantumCrab. 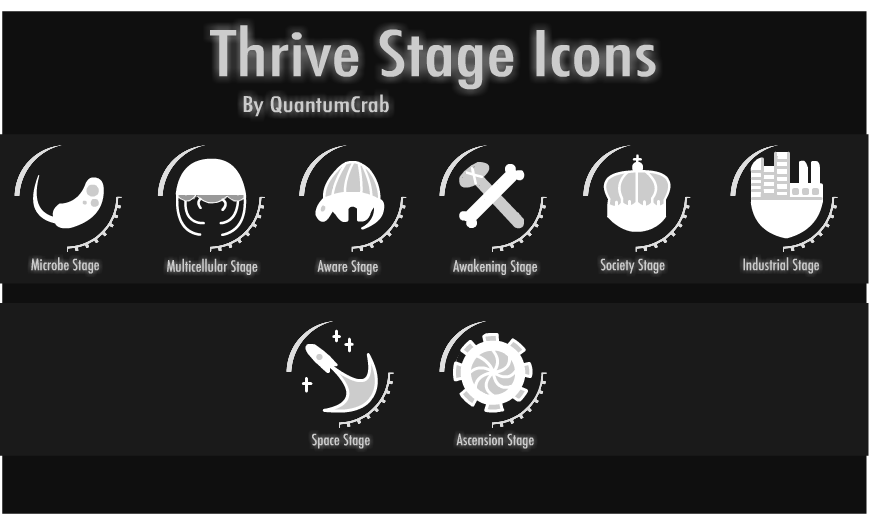 It’s silly to say, but this really was a childhood dream come true for me. I was so happy that there were other people than myself that actually cared about Spore, and even decided to try and make their own spiritual successor.

After the initial excitement wore off, I only checked in on Thrive very occassionally. Development was quite slow at the time, and I lost a lot of hope for the project. After a while, I stopped checking in on it completely, until about December of 2020. I think I rediscovered the launcher on my PC, and decided to play the game once again to see if anything had changed. I immediately noticed the vast amount of improvements, and my hope for Thrive had returned.

I’ve been following Thrive to an extent from then to now. In March of this year, I finally decided to sign up to the forums, and the rest is history, I guess.

Anyway, sorry for this novel of a post, I just wanted to share my story with Thrive. I’m really glad I watched that YouTube video and discovered Thrive, because otherwise the past two years of my life would be quite different. I think the vast majority of people can relate when I say that life can suck sometimes, and having Thrive can actually help. If you who is reading this has contributed to Thrive in any way, please know that you are not just making a video game, you’re providing help to many people who may be going through tough times. Thank you.

(There are a total of 485 words in this post. Wow, I spent way too long writing this.)