Hey, you can smite me after you answer my question; what is 0.4.2 going to include?

The main thing we’ve been working on is trying to get the basic patch map working.

So in previous releases all the content was all in a big pile, you could use chloroplasts, chemoplasts, rusticyanin etc all in the same patch and there was super abundant energy everywhere.

Now stuff is more spread out and not every patch has every energy source so hopefully it’ll be interesting to work out what works in which areas and how each biome is different. Also you can’t rely on glucose clouds anymore as free energy.

However I’d manage your expectations a bit with it. We’re still working on autoevo (which will be a while) so the ai cells won’t adapt to the other patches and may just die a lot

There’s still a lot left to do to get the patch maps to where we want them to be, however everyone (esp hhyyrylainen) has put in a tonne of work to get the foundations solid which is a really important part of it.

The planned 0.4.2 release is approaching so here is a release candidate for testing. We have changed graphics engines so there will likely be some issues regarding that. It would be nice to fix any graphics related crashes before the full release, but that’s perhaps too optimistic. Before reporting an issue please see the end of this post for how to. Here are the downloads: Windows: https://boostslair.com/files/thrive/Thrive-0.4.2.0-RC1-WINDOWS-64bit.7z SHA3: 47c2c92c96e85e2b91491ba378aca84…

If you’re going to spaz out once every day for the next three days, we have to set some ground rules because this will not stand. 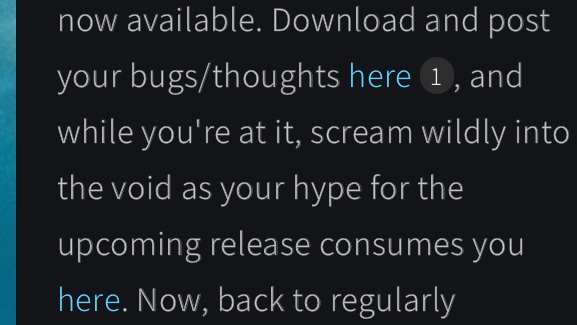 I was mistaken, I hereby hand over my

i am sorry i did not update my building’s internet was shut off.

This is my first time actually playing Thrive… to say I’m impressed would be an understatement. Keep up the excellent work, devs!

Edit: I’m also going to need Wikipedia at the ready… if you are ready to think that I know what “chemosynthisizing proteins are” you’ve got another thing coming.