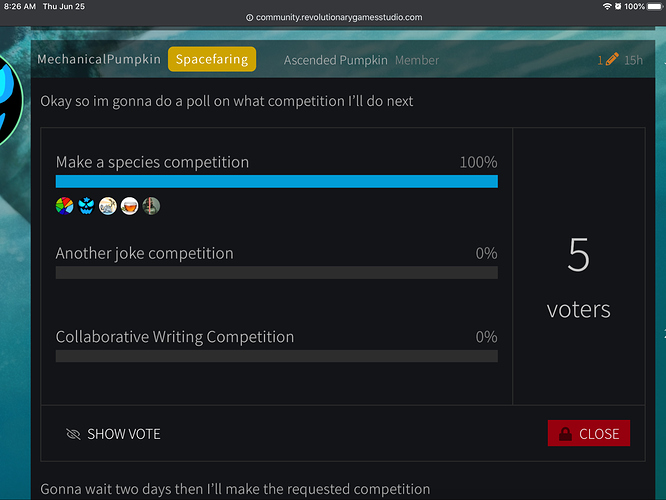 The first and most important rule is to make a species(obviously)
The second rule is that you also include its habitat, it’s abilities, and a description of what it looks like and what role it has on its ecosystem.

Unlike making jokes I already have some experience with making species so I’ll be participating here as well.

You can make one species and there will be two weeks to wait until a poll will be conducted, lasting three days.

Oh and there’s a theme too: Ice animals

You can make anything that is suited for colder biomes, like a freezing lake, the ice caps, tundras, and more.

You don’t have to create alien animals btw you can make animals on earth. 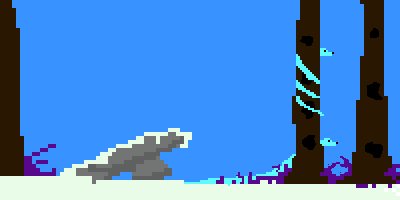 Ice serpents can grow to be 13 feet long, and move as fast as 20 mph. The Ice serpent lives in taigas (winter) and tundras(summer). They are the apex predator. Their main prey are the Purple Quazairs and tree-burrowing Zailids. The Ice serpent is going extinct due to their slow reproduction, and requirement for snow, which is melting due to the sentient species on their planet causing global warming.

Habitat: Any cold place on Crabbol

Role in ecosystem: The second main predator of the ice caps

I spent far too much time working on that.

Beware of my super interesting bacterium !

I’m actually quite interested in the real-life inspiration. Do you have its name? I would like read more on it.

i don’t have its name but you should check that

Bioprecipitation is the concept of rain-making bacteria and was proposed by David Sands from Montana State University in 1982. The formation of ice in clouds is required for snow and most rainfall. Dust and soot particles can serve as ice nuclei, but biological ice nuclei are capable of catalyzing freezing at much warmer temperatures. The ice-nucleating bacteria currently known are mostly plant pathogens. Recent research suggests that bacteria may be present in clouds as part of an evolved pro Ic...

So… create more species
You have more than a week of time to complete them!

Edit: edit so this thread won’t be forgotten
You have about a week to complete your species

We can only make one species right?

i haven’t finished my species (well i have but i need to rewrite it for it to not need previous knowledge to understand), so how much time do we have left?

Not really, just procrastinated, at most it’ll be as good as the Kao’as in the XenoBiology Center of Terra™

Thanks Nover for reviving this competition!

how much time is left @MechanicalPumpkin?

There is 3 days left

Yep there are three days left
Can’t wait until the poll!

So the poll will be made tomorrow?