Billions of years ago:

the big bang, a giant burst of energy which resulted in the birth of the star Kio-3o9. this star just so happened to be inhabited by an earth like planet. Its name is Droria. placed in a location where liquid water is able to exist. Droria began to sprout life. simple unicellular blobs containing something akin to DNA began to float around nearby hydro thermal vents. until a particular creature came into being. wiping out all previous life on said planet. it was called luca. 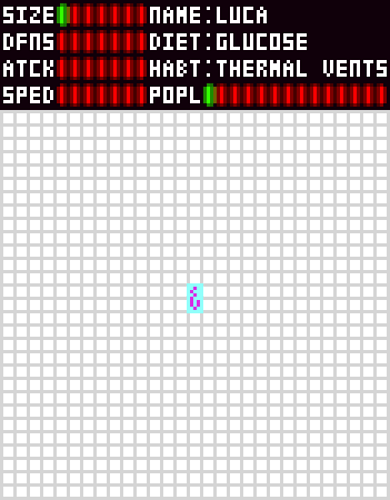 Little did this small creature know. that it was just the beginning.

If anyone wants to evolve luca, here is a template you need to follow.

Name:
new branch?: (specify if this is a new species which has branched off from luca or if this is lucas next evolution)
Evolutionary purchases:
(advised you use bullet points like below)

The sea is stagnant

Gotta love all this new diversity.

The seas are calm

Seeing as our game is progressing quite fast. here are some things i feel i need to clarify.

every player has a max of 3 active cell species they can create. these species can be born from any existing cell in the game.

You have 10 EP to start off with a new branch species.

If anyone else wants to join in. feel free to branch off from another species.

With that being said.

does that mean i can still evolve flagellatid?

You’ve also got room for control over one more species which you can evolve at anytime (keep in mind having similar cells will result in them competing for food.)

In that case can I edit Compositis comedenti to just be the evolution of Celeri Comedenti? I think I want to wait before I create another creature.

everyone spent their evo points, so next round please @Deathpacitoast

The seas are stagnant

hey guys! just a heads up. due to the sudden burst of diversity. doing these will be quite time consuming. so bear with me if i take a bit more than a day to come out with a checkup.

How do I know the cost for things?

You can see the cost of organelles on the google doc. on the bar just beside name is the cost of an organelle. incase you’ve lost track of it. here it is:

Name Cost Buff/Debuffs Info Image Cytoplasm 3 EP After 5 cytoplasm your cell increases in size by 1. The cytoplasm is a medium for chemical reactions to occur. Capsule 8 EP Increases a cells defence by 1 The capsule is a thin shell which protects...