My experience is kind of the opposite: I found puzzle games to be similar to programming, but the problems you are trying to solve are setup by a person, so to me they feel pretty arbitrary. I’m not keen on being a human depth first search algorithm. Because of that, I don’t like most puzzle games, and don’t play that many puzzle games.

Hello.
As i understand, we use the theory of primordial soup.
Now i explore the origin of life. Now (ok, in 2016) the main theory was the “primordial pizza” - life appeared in the mud volcanoes. Firstly there appeared RNA (there are some theories. If you want, can tell you in other thread), which after had upgrades like lipid membranes, DNA, proteins (for replication) and etc. Of you want to understand why - tell me, I’ll explain.
So the start of the game should be changed.
To not delete all the progress of game, done now, i suggest next way. Life appeared in mud volcanoes, but not developed all the time there, so the origin was destroyed, or the life found a way to exit it.
At start you will be a cell in volcano, where a lot of organic, phosphates, sulfates and similar chemical molecules. In some populations can happen something, will change environment for the shallow water (like flood) or underground water (volcano fading and life went in seeking good environment)
P.S. Actually, the question.
What the theory of origin of life will use Thrive?

I will attempt to ans your question,

Thrive aims to be a evolution simulator, and not exactly the ’ beginning of life’

In the current game, we don’t start from a single strand of Ran, but LUCA ( last common ancestor) .

Which was complex enough to be called a species, but lacked everything which we know today.

A before life stage could be a great addition but not necessarily a starting point.

No, I don’t mean, that Thrive needs new 0 stage.
I mean, LUCA should appear not in ocean. It should appear in closed mud volcano.

What the theory of origin of life will use Thrive?

Unless someone wants to rework the start of the game, vulcanic vents will be assumed to be the origin of live.

In the current game, we don’t start from a single strand of Ran, but LUCA ( last common ancestor) .

Which was complex enough to be called a species, but lacked everything which we know today.

A before life stage could be a great addition but not necessarily a starting point.

There’s a thread for that:

I was thinking to add to the depth of the game, it would be vastly interesting to begin the game in a defined world (A multi-nuclei cell.) with many organelles, proteins/enzymes, and begin life as a simple protein(virus). Then as you become a more complex protein you add other complex protiens to your chain, and attack other organelles, nuclei, and begin forming a lipid-bilayer for protection against other enzymes in the cell you’re inhabiting. Then when you burst free from your host-cell, or …

That one is new to me. One of our new theorists is a supporter of the theory about life beginning in warm ponds. So you’ll want to post your evidence why mud volcanoes are more plausible.

ok, but how far away is each patch from each other?

We start in the Volcanic Vents patch, but what if there was a patch which was inside one of those vents and after the tutorial the cell gets force-moved to the Volcanic Vents Patch (like the vent erupting)? The only problem I can see is the player moving back into the vents…

How does storage work exactly? The editor says +4 storage when adding cytoplasm, but in game, every cytoplasm adds 8 more space for compounds, which is counter intuitive.

Cytoplasm adds +4 in game too. Most likely your cell was replicating itself in preparation of reproducing, meaning you now had two cytoplasm hexes.

That’s exactly the case. Most players seem really oblivious regards to that mechanic.

It’s very plausible. If a higher tier patron leaves, it has a pretty large impact on the overall amount.

In the future, could there be more ways to enter the editor? What if a cell reproduces like a Bacteriophage by injecting genetic code into a cell to make more of itself?
(Non LAWK) Why not a Pilus that injects the nucleus into another cell to hijack it?

(Non LAWK) Why not a Pilus that injects the nucleus into another cell to hijack it?

This is probably physically infeasible in addition to not being LAWK, as you would need a massive hole for the nucleus to pass through a tube.

I wrote about it a little in this theme

Why don’t you share your save files on the save file thread?

Necroposting goes brrr. Anyways, first, i don’t know where to find save files, and i couldn’t find it anywhere. I also don’t really have a reason, if i want to show my cell i can just screenshot. And the challenge stuff, i don’t really know what to make. A challenge would be better if started from the beggining of the game, right? The options are really limited when you have to make it based an existing cell…

and i couldn’t find it anywhere. 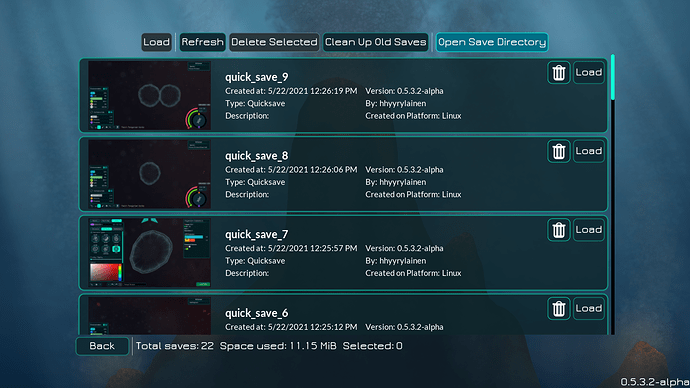