What types of creatures could make it to sentience Eg: amphibian, mammal, reptile.

Its better to ask these questions in the quick questions thread, also, theres no creature “type” in thrive, your creature could be literally anything you want, and would still be able to achieve sentience

I agree with @TeaKing , this should be in the Quick Question Thread. But really any creature could reach sapience as long as they could gain all of the requirements. And, maybe, there might be sapient plants.

You ruined his dreams, man

Why not underwater creature which melt metal in hydr-

This user has been banned

Would we still have the option to play as a plant or fungus? That would probably be quite boring.

I think if you play as a plant then the game should act different then as an animal, I don’t know how maybe it could be like plague inc or something similar. But you guys need to make it interesting not just something that’s implemented just to be implemented and doesn’t add anything to the game, make it a realistic choice the player could make and have fun with.

I remember seeing a reply to a comment (made by a music man from thrive I think) who said insectoid cannot become smart. Tis why I asked.

On earth arthropods use a different brain architecture then us vertebrae that limits their intelligence far more severely then us tetrapods, going so far as to make sapient behavior as impossible as it is for a protozoan, though, much like the protozoans, they went and learned to cooperate, with ants being nearly as adept as humans at war, slavery, and other hostile behaviors. This is no reason that a creature superficially resembling/behaving like/growing like a insect cannot grow as smart as a human.

Aren’t insects also limited by oxygen intake? Since they respire passively rather than actively they’d need the have a lot of oxygen in the atmosphere to support advanced brain structure (Or have lungs).

To grasshopper have some kind for air sacs: 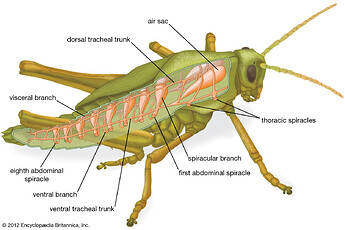 image1600×1067 280 KB
It helps them breathe better compared to other insects (And one species of them is even the largest insect in the world [in New Zealand])
So if I think that oxygen intakes in insects is less relevant when it comes to brain structure…
And with enough time to form an intelligent insect (the closest example to a real intelligent insect is bees, which have been shown to know how to count)

Side note: You can look at a completely different truly intelligent creature: octopuses. Octopuses do not have a real brain, instead they have several collections of neurons that are able to do an action that is really similar to thinking, only different … It is possible that insects will develop something similar, or something different and bizarre different … (edit: Do not forget that the oxygen concentration in water is much lower than in air [3% on average])
Yes I do not take down the fact that thinking requires a lot of oxygen and energy (20% of a person’s calorie intake per day is that of the brain) …
That is my opinion on the matter