My list:
Scp-507
Disturbing images and websites iceberg explained
OCD(Really bad when you get urges to watch creepy videos and click and open tab multiple times, which traumatized me when I was littler with a creepy video involving gurgles and bugman image edits, and I could not really tell parents because they would be like “what the heck are you watching???”, but now semi-got-over-it)
Everywhere at the end of time
Being watched
Gurgles & Bugman
Monday morning
Sleep paralysis(one of the reasons I sleep on my belly and not back)
Sunday night
Not having a good future and not getting a good job
Being watched by someone through my bedroom window
Watching a creepy video and getting a scary image in a video, then getting really scared and having a hard time sleeping(Happened a lot when I was littler, and for some reason it happened after watching a bright side video. Mostly happens to me now after watching iceberg explained videos)
Sleeping, only to imagine jeff the killer in my room and opening my eyes to check
Creepy iceberg charts
Ben drowned
Some John zombie minecraft creepypasta
OCD related to the annoying website(google it up, I refuse to put it here because I do not want a direct link, and feel a urge forming now)

the scariest, most terrifying, and most disgusting thing i have ever seen is called Coffee
just saying its name sends shivers down my spine

The boring company didn’t solve traffic, but for going to mars, the world still needs him.

but for going to mars, the world still needs him.

SpaceX is literally taking a lot subsides from NASA.

SpaceX is literally taking a lot subsides from NASA.

Let’s not start an offtopic debate here. But I can’t help myself to comment here that, if NASA doesn’t have a viable (within a similar budget and time range) alternative contractor, then they cannot replace SpaceX for that task.

you mean the backrooms level 0?
Edit: Why people thumbsdowning this?

Me: takes several minutes to remember what I ate or drank for lunch
My head: starts playing the eateot song “E1- Back there Benjamin”
@Trappist-1e How can you not find E1 why not just look for the entire album on youtube and just look through the songs, which are a lot, but not like hundreds
@hhyyrylainen what do you mean? who broke the posting streak, and why can I double post again(isn’t double posting always disallowed here)?

FINALLY I’VE BEEN LOOKING FOR THIS SONG FOR MILLENNIA AND NOW I FOUND IT.

Oh no, you broke the posting streak and now @TheForumGameMaster can double post again in this thread. The forum software prevents non-staff users from quadruple posting.

Psst, @TheForumGameMaster you should avoid double posting, and triple posting is even worse.

@hhyyrylainen what do you mean? who broke the posting streak, and why can I double post again(isn’t double posting always disallowed here)? 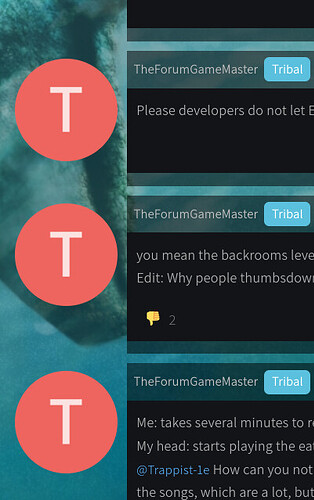 And yeah, double posting is disallowed, as you knew, but you still did it and then even went to triple post.

I know I’m now double posting, but you should have really replied with a normal post to me. And not edited 2 posts old post in this thread (which luckily I see because discourse sends mention notices for edited posts, which is why you should edit a post instead of double posting because you can add all the new info you want).

Wouldn’t they still have been able to post due to being the creator of the thread?

Not that I think multi-posting is a good thing, but just bringing it up