TLDR: What if people think of really complex technology before we did it in our timeline? How does that impact society?

How much freedom can you imagine there being in the civilization stage in terms of discovering techniques and tools? I remember in the Animorphs books that the alien species invented the computer before the phone or something similar to that. And I wonder how much that can apply to thrive. It’s hard to determine how much variability there can be in advancement in technology. I mean fundamentally we get ideas from what we already have and what we already know. It’s hard to imagine coming up with a jet plane before you’ve invented a steam engine, but there are certain things that I feel could be invented much earlier, given the right conditions of culture, ideas etc.

I was watching a video about making fully mechanical logic gates when I realized that although they were slow and clunky they fundamentally worked. If somehow the knowledge needed to get to the idea of stringing together logic gates to solve problems (extremely likely math) was invented, I can’t think of why you’d need electricity for it. Obviously, you’d be majorly inhibited by the limitations of doing things mechanically but it would kind of work. And imagine what that could lead to culturally and technologically. I’d imagine that they wouldn’t come up with screens as we have, but surely there’d be some way to visualize things. And if they moved more down that technological path it’d be more into the realm of ideas we haven’t discovered. And this is a major issue with a type of simulator like this, we can only really come up with things that we well can think of. We don’t have their cultural lens or different perspective to come up with new technologies and theorize everything.

This post wasn’t meant to be all about the idea of pre-electricity computers but the idea of major advancements before they were invented in our timeline is kind of weird and troublesome. But if you disturb the order of societies scientific/technological/mathematical progression it’s going to have big ripples. And it’s hard to imagine how you can invent something much earlier. I remember from I think a sauce video, the mention of some old greek concept that could have been an early steam engine that was never built for some reason. So we know that these kinds of ideas don’t require the same path we took. I’m not very sure what you’re going to take away from this post, it’s been too long since I last looked at this game to know what ideas you have for a tech tree or whatever you decide, but I think it could be very interesting to keep in mind the idea of massive variation in technology development and what it would mean culturally and scientifically and whatnot.

TLDR: What if people think of really complex technology before we did it in our timeline? How does that impact society?

Thinking of a technology doesn’t mean you can make it. For example if we told scientists on Earth 100 years ago about our latest generation CPUs, they would have no way to make them.

I think in Thrive you’ll be able to beeline towards specific technologies but you can’t skip over the technologies required to make that other technology happen. Also I think there’ll be some kind of technology cost system that means when you get more and more technology, if you skipped on some tech it will become much cheaper to research, and maybe even unlock automatically basically by your population just stumbling on it as it has become so obvious.

Interesting point about mechanical computing… even on Earth we have evidence that certain kinds of mechanical computers where made. On Earth the reason why computing advanced was the need to do code breaking, so there was a need for computing technology, it didn’t appear out of nowhere.

Thinking of a technology doesn’t mean you can make it. For example if we told scientists on Earth 100 years ago about our latest generation CPUs, they would have no way to make them.

You’re definitely right about that but our modern CPUs are built on the foundation of all the knowledge we have about them now and the investment in that specific research. The Turing machine being thought of from codebreaking is actually a great example and makes me think that if there was reason to decode something or solve something like that much longer ago it could have lead to a similar revelation. Obviously, Alan Turing didn’t think up a motherboard on a whim but the concept of a machine that could change data based on what rules you give it. If some other inspiration or even the same one much earlier in a culture’s history happened, it could conceivably lead to some kind of “computer”. I remember making much more basic german encoders/decoders with paper so you could imagine if the mathematics was developed enough and the culture deemed it necessary, that it could happen even in a very similar story to our own with a decoding “machine” becoming inspiration.

I tend to assume that if the dark ages had never happened the 1400s would have been the 20th century but with Rome and byzantinium playing the roles of britan and russia, and by now we’d all be nuked or on mars. we tend to think of tech as an advancing march, but take the ancient world. Greece had better mechanical and intellectual tech than it’s successor, Rome, which had less astrological skills than the Aztecs, who were quite literally in the stone age. these is nothing stopping a civilization from progressing at one or all parts of a tech tree faster than other parts or civilizations, or for that matter, loosing certain parts of a tech tree. I don’t see any problem whatsoever with differing rates of tech gain.

the problem is things like mechanical computers. if you have a need for a computer, you make one. if you need fast computers you make electronic ones. if world war 2 never happened we wouldn’t know what a video game was, let alone find ourselves on a non-physical, internet based forum about a video game.

you cant get that far with computers unless you have electronic ones. this is similar to many other techs; you cant have air vehicles without combat air vehicles (that’s humanity for you), you are unlikely to have preindustrial astronomy (astrology) without religion, you will get missiles if you have nukes, you will get space travel if you have missiles. aside from this there is nothing stopping you from having modern tech but lacking, say, any cooking tech beyond fire, or a stone age civilization with mechanical computers and true astronomy.

missiles were created before before nukes fire works are in fact, a missile, just used for another reason than war (even thought they were created as a weapon by chinese people.)

I think in Thrive you’ll be able to beeline towards specific technologies but you can’t skip over the technologies required to make that other technology happen.

Some sort of tech tree of sorts?

I met that if you get nuke the “evolutionary pressure” to get better delivery systems is huge. most likely you will get better air travel (like the mainstreamization of the jet plane) and further on cruise missiles, ICBMS, and so on. if we hadn’t had simple missiles already we would have slowly got them if we had nukes. on earth missiles advanced. On another planet we would get long range missiles even if you didn’t start with them.

Maximizing player freedom and making an unique tech system is nice and all. But how could these ideas work concretely? It’s not possible to make a game from ideas that are not possible to program. So I think it’s very important to discuss plausible ways for research to work in thrive. I’ll share my idea how technology would work, which I as a programmer think is actually implementable without major issues. First off, I don’t think it is plausible to make an editor where the player can by placi…

I met that if you get nuke the “evolutionary pressure” to get better delivery systems is huge. most likely you will get better air travel (like the mainstreamization of the jet plane) and further on cruise missiles, ICBMS, and so on. if we hadn’t had simple missiles already we would have slowly got them if we had nukes. on earth missiles were upgraded on another planet they could be discovered.

How will we even make this anyways, most tech will be to complex for the player to make, but we give the player more freedom, have we bit off more than we can chew?

There was quite a lot of discussion about the tech editor lately, mainly here, but there is still a lot of unanswered questions.

I’m aware that the developers plan on making most items customizable such as dwellings, vehicles, and related things. But what I’m curious about is if there will be a chance to customize everything. From hammers to paintings and the like. To me that seems a little over the top. So I propose the possibility of “random” creations of less significant items like decorations and carriages. I know the developers want everything to be customize-able, but there is a point when that becomes overwhelming.… 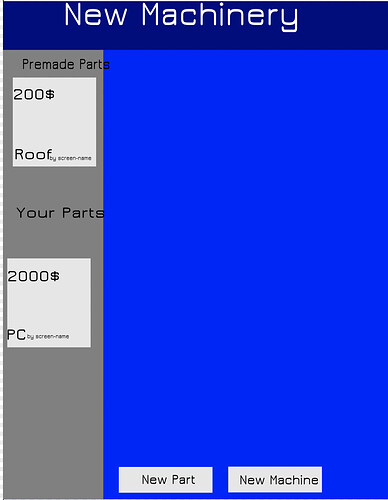 The new part editor try’s to launch a separate app(that allows you to make parts), but if the app won’t install, it will give you an error and a popup to install the part creator, and yes, parts are crowdsourced.