Neuronians - a jellyfish-like species with a powerful nervous system and even a mysterious biological mechanism that allows for electric generation in a certain organ. Can zap opponents with a portion of their body that leaks out a special zapping nerve, but this comes at what cost?
Intelligence: 160IQ(Genius)
Terrain it thrives best in: Water(since electricity travels farther)
Consumes : 3/food per day(gluttonous)
Raw power: 20(Elite)
Starting population : 3

The morphs- Pale, malevolent, hive-minded, parasitic beings that only wish to spread themselves through a parasite like cycle.
Intelligence : 40IQ(Dumb)
Terrain it thrives best in: Wasteland
Consumes: 0.2 food per day
Raw power: 5(weak)
Starting population: 20

Now… As for how to play, each turn, you do the following:

Political ideologies:
Tribal- Starting idealogy
Happiness : Content(happiness describes the likeliness of a revolt you have to supress popping up)
MIlitary: average(no bonus to military)
Production: low( workers have 25% reduction in efficiency)
Freedom : average (how much control you exert over citizens, thus deciding the limit to how extreme actions you do can be)

interesting, gonna join this, but shouldnt this be called Thrive of empires 3.0?

Then you have to join the map link I posted in order to place your civilization on the map
Also, what is the civilization you choose

I do see that you added a slide, but I can not access, can you give a screenshot?
Or can you just tell me the name of the territory you claim 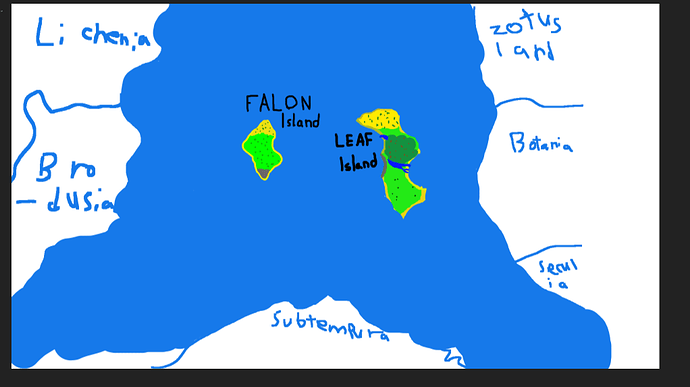 image1022×574 55 KB
I started to color in the islands for hw I thought their biioms would be layed out, let me know if it is “cannon” else tell me what to change, I also forgot falons islands name mid way through, lol
GodOfKnowledge (Dungeon Master) August 3, 2022, 5:49am #8

Do the morphs have any special capabilities? For example, can they take features from their hosts?

Watch the double posting please, you simply could have edited the above post with a ping for knowledge you fixed it yay

I may or may not join, but if I do I’ll probably be the jellyfish dudes

Is that all the research options?
If so

5 - foragers
May I do fishing?

Oh yeah I forgot about that… You need hunting and harpoon(comes from spear, 7 points), to fish(10 points)
Here is a formal list of the jobs(brutuslians and humans only) you can assign your citizens:
Forager- forages 3 food per day
Citizen - Stays at base, does not collect food, but will protect base in case of invasion, will produce 0.5 offspring(it takes one citizen 2 turns to make 1 offspring)
@GodOfKnowledge

Ill join in too if i can. Ill be the morphs and ill claim brodusia. What can the morphs research and do?

I updated with morph research options
What do you assign your population to? Note: you have a starting population of 20 morphs
jobs you can assign your population to:
Forager - collects 0.5 food per round/day
Attacker - protects your hive/tribe, can also invade neighboring civilizations(has a limit of 10 attackers, you need to unlock armies to reach 100 attackers)
Maid - Tends to baby morphs, makes them grow up in next round instead of 2 rounds(1 maid = 1 baby morph tended)
Queen - produces 3 offspring each day, but requires 2 food per day
@Null

I’m going to go with Neuronians. I’ll mark my place on the map soon.

My first actions will be to research Tools and Food Smashing, (total 7 points, I have 8), and to assign one civilian, one toolmaker, and one forager with my three starting pop. Oh and make us democratic

Edit: I claimed some water in the middle of the Exodus Islands

Now here is a list of neuronian jobs:
civilian - produces 1 offspring per turn
forager- forages 6 food
toolmaker - adds 2 tools to your tribe inventory
Note: Normally, one of your citizens would starve to death if they did not get enough food, but for time and simplicity’s sake, and since you just started, I will let you be with your job selection, but next, round you must get more foragers, or your fellow neuronians will starve and die off
@TwilightWings21 I said I will let you have your tool maker for now, but next round you must ensure your consumption is lower than then the amount your foragers produce

Yeah I’ll just use the one pop made by the civilian and the civilian themself as foragers next round, and turn the tool smith into a civilian. Easy fix but I wanted tools for this round and didn’t know how much food each forager produced