Before I had access to posting on the development forum, I would oftentimes see something and have just a tiny piece of input which I think would be cool for the developers to consider. So that’s what this thread will be.

Attach a link to a specific post you see on the development forum and leave a scientific source, fact, or small idea to consider. Keep in mind that we likely won’t consider massive shifts in existing game design, and would probably appreciate information we haven’t considered yet for whatever reason.

Fun! Let’s break this thread in then. I’ll (try to) keep anything I post in this thread as small and infrequent as possible.

In light of the roadmap mentioning the implementation of organelle upgrades, unlocking, and endosymbiosis being targets for 0.6., let us finally create a unified concept for how these essential mechanics will work. Design for unlocking parts has been...

There seems to be some concern over not letting the player advance through the stage too fast, and one option I have not seen mentioned here involves the biological fact that evolving f.e. a pilus for the first time is a much bigger deal than evolving 3 more of them. If placing an organelle/protein for the first time (when any conditions are met) cost as much as the nucleus, it would make the playthrough develop more gradually without needing to make conditions to restrictive. You would also be more picky in what you choose to unlock each time you play.

I think we’d want to stay away from first-time purchase bumps, but we might just implement an MP cost for unlocking certain parts. Which is essentially the same thing but a different flavor and tone I feel. It was brought up in that same discussion later. 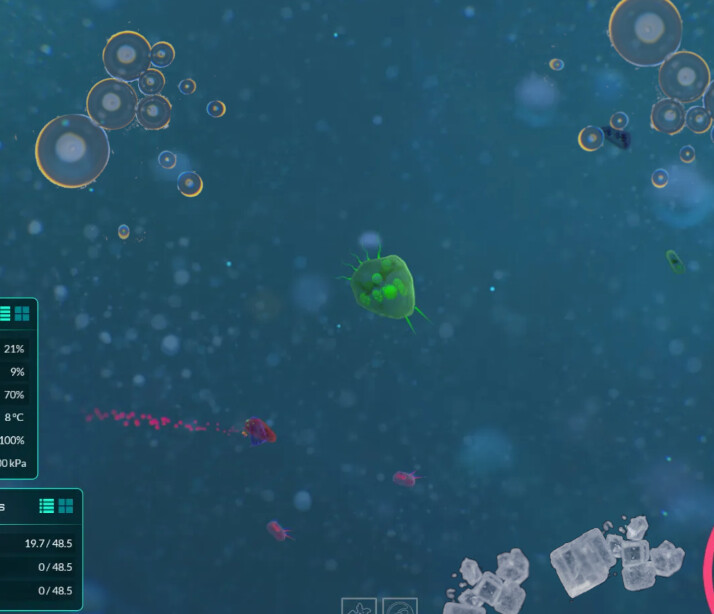 I’ve had one idea simmering in the back of my mind for the past few years. It’s probably one I’ve debated back and forth to myself the most. It was most recently triggered by reading one of our top Steam reviews mentioning that plants basically...

What if there’s a mixture of constant ammonia/phosphate (and other compounds if you go all the way) gain and “hot spots” in some areas where the clouds would be used to signal this to the player. It would also make chemoreceptors have a very similar use to what they have now if all compound clouds are removed, as they can still point to compound clouds (hotspots).

Agree, but the clouds could also be replaced with bubbles

Fossilisation requires a barebones implementation of the Thriveopedia (or Thrive Content Library or whatever), so it’s about time we figure out how this thing should work. The Thriveopedia is, as far as I can tell, a bit like Cilvilization’s...

I had a couple of ideas for this. First one was going with the word archive either next to the game name or the word universal. Second one if a really original name is desired, then maybe go with an acronym. I think that would be pretty neat. Something like C.A.K.I.U. (Collective Archive of Known Information of the Universe), G.W.I.D. (Galaxy Wide Information Database), or U.C.C. (Universal Comprehensive Compendium).

I disagree with implementing this. While it makes sense in terms of realism and evolution, I feel that it is largely unintuitive for the player to have to first evolve defensive parts… to then evolve mobility parts. In order for progression to feel...

“I just don’t want players to be forced to… take a detour of sorts to get where they want.” The process behind what was described by NickTheNick is one of the basic principles at the heart of all evolution. The principle of functional elements that are derived from elements that evolved for a different function operates on all levels, from proteins, to organelles, to tissues, to organs, to limbs, etc. Even tools, materials and societal structures work like this. If you make a development decision to avoid it, you’re going to run into problems increasingly often as you approach more complex forms of life.

Also, this: “In order for progression to feel good for the player, it needs to form a path of incremental return in the desired form.”
Is notably not how most games that have tech trees work. Just take a look at Civilization or Stellaris, etc. It’s full of some intermediate steps that have very different effects than what precedes or follows them.

Of course, you can think of other potential ways for any particular organelle to evolve, I would just advise against eliminating the paths we actually know worked.